The 2018 Hampton-Alexander Review (the review) aims to increase the number of women in senior positions in the FTSE 350. It proposes that FTSE 350 companies should aim to have at least 33% of their board made up of women by 2020, echoing Lord Davies’ 2011 recommendations.  With the 2020 deadline fast approaching, Market Tracker has reviewed the FTSE 350 regarding these targets.

Our research has found, that in the 2019 AGM season (defined as companies whose financial year end is between 1 April 2018 – 31 March 2019, excluding close-ended investment trusts), only 33.57% of the FTSE 350 have met or exceeded the recommended 33% target. Of those who had met the target, it was found that, in most cases, female board representation was made up of non-executive directors. Market Tracker notes that only 16.13% of the FTSE 350 had 33% or more female executive directors. 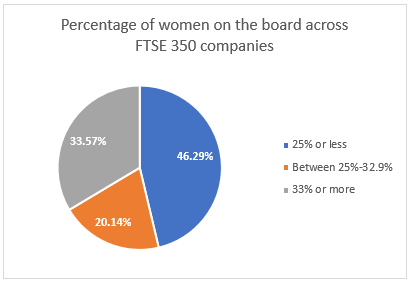 The review recognises that, in order to achieve diversity at the highest levels, a sustainable pipeline of talent must first be developed. Therefore, the review extends the 33% target beyond the board room, and into leadership teams.  In this regard, our research has found that only 23.05% of companies have 33% or more women in senior management positions, with a further 25.78% on track to achieve this target by 2020. 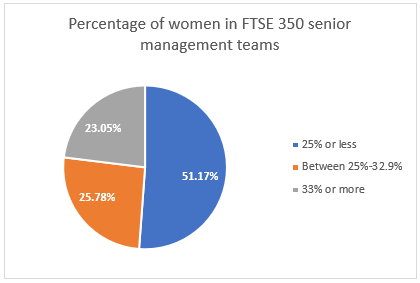 Vodafone is a notable example of a company which is on track to comply with the recommendations. It is already complying with the review’s proposals with respect to the board room, as 42% of its board members are female, and further, of the executive directors, 50% are female. The company is also very much on track to achieve the requisite level of women at senior management levels (currently at 31%).  Vodafone’s aim to be the ‘world’s best employer for women by 2025’ has led to increased initiatives aimed at tackling barriers to women’s progression in the workplace, including a ‘global maternity policy’. Alongside this, the FTSE 100 company has conducted a report in order to encourage other companies in the push for gender diversity.  The report investigated cultural factors amongst companies that had met the recommended targets, and noted 3 common focus areas:

The Vodafone report believes that a combination of the above are the necessary driving factors in order to promote women into more senior roles and ensure a more diverse work force.

Conversely, the FCA reported on 25 October 2019, that ‘senior levels of finance are nearly as male today as they were 15 years ago’, despite a push for diversity in the industry, as highlighted by initiatives such as HM Treasury’s Women in Finance Charter.  Our research shows, within our sample, that only 21.05% of companies in the financial services sector have met or exceeded the target ahead of the review.  However, with several industries having less than 25% women in senior management, it is clear there is much work to be done. Furthermore, we note several instances where no disclosure has been given by a company regarding gender statistics within senior management.

The review also recognises the role of executive search firms in improving the figures and building a diverse pipeline.  In particular, the use of executive search firms who are signed up to the voluntary code of conduct is highly encouraged. The code encourages search firms to work with the client company in order to develop “appropriate targets for enhancing diversity in senior executive roles and in developing plans to strengthen the pipeline of diverse candidates”. This includes ensuring that longlists of candidates include at least 30% female candidates, or an explanation where this is not the case.  We note that many of the FTSE 350 are now actively engaging with search firms who have signed up to either the voluntary or enhanced code of conduct in an effort to promote gender and ethnic diversity.

Market Tracker looks at gender diversity in greater detail in our upcoming AGM trend report, to be published next month.