Following the announcement on 25th September of a new government-backed board comprised of senior industry bosses to promote diversity and inclusion in business, Market Tracker takes a look at developments in relation to the Parker Review and the ethnic composition of FTSE 350 boards.

Almost two years have passed since a review led by Sir John Parker highlighted the lack of importance given to ethnic minorities on the board. Despite UK markets being at the global forefront of international business, his findings indicated that only 2% of all board of directors were UK citizens with an ethnic minority background (despite ethnic minorities making up 14% of the UK population). The Parker Review initiated discussion around the lack of ethnic diversity and encouraged boards to be more representative, by implementing aspirational targets. In line with this, FTSE 100 companies should aim to have at least one ‘director of colour’ by 2021, and FTSE 250 companies should aim to achieve this by 2024. Where this has not been achieved, companies are expected to disclose reasons for non-compliance.

Following the final review of the Parker report in 2017, there has been steady progress regarding ethnic disclosure at board level.  The FRC conducted a review into Board Diversity Reporting and found that a year on, 10% of FTSE 350 companies made some form of reference to the Parker Review in their board diversity policy. Market Tracker has conducted some more recent research and found that for companies with a financial year ending 1 April 2018 – 31 March 2019, 28.9% of the FTSE 350 (excluding closed ended investment funds) made a reference to the Parker Review/report. With the impending deadline for FTSE 100 companies, we can expect this figure to continue to increase.

‘From 7 May 2018, 17% of our Board were of non-white ethnicity. This rises to 20% after the Annual General Meeting in April 2019. We will also look to increase ethnic diversity on the Board following the Parker Review as appropriate…Ten members of the Board are white and two are of Asian ethnicity’. 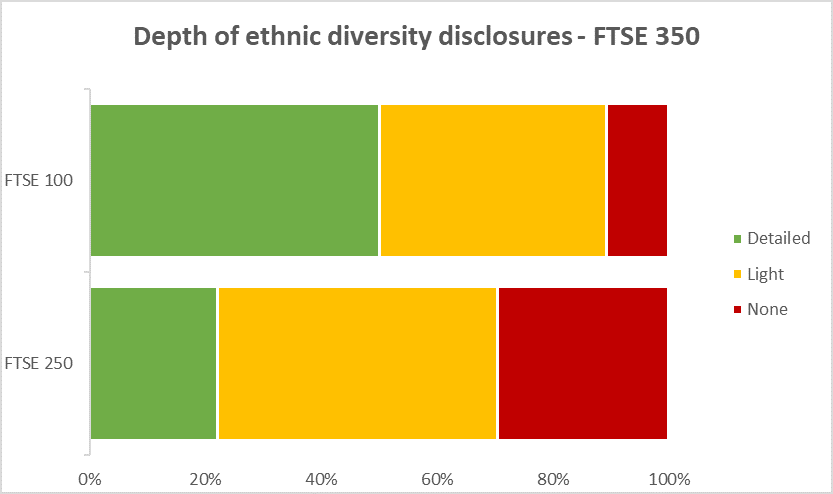 Whilst discussion is happening, the rate of progress in relation to BAME board representation remains slow. However, there have been promising developments on a wider scale. The McGregor Smith Review, published in 2017, found that BAME individuals struggle to achieve the same progression opportunities as their white counterparts. In July 2019, the government set up the Office for Tackling Injustices, suggesting that increasing ethnic diversity requires greater work to be carried out on a societal level. In addition, our research found that the focus on ethnic diversity in annual reporting appears to be concentrated below board level, with around 95% making some form of reference to ethnicity within the wider organisation. This figure dropped to 76.76% at board level, of which 45.42% simply acknowledged the need for ethnic diversity, with no details or plans on how to achieve this. In such instances, companies often state that they ‘recognise the importance of boardroom diversity, including gender and ethnicity’.

We found several instances of companies making a detailed disclosure regarding the ethnic makeup, policies and prospective plans within the organisation, yet omitting or keeping brief any discussion of ethnicity at board level. For example, in the Phoenix Group Holdings annual report, the company disclosed the difference in its BAME workforce from 2017 to 2018 and gave details of available networks to help support BAME employees. However, at board level, ethnicity was not openly addressed.

‘A Black, Asian and Minority Ethnic (‘BAME’) Network – Mosaic exists to identify and address any barriers to development and career progression. The network enhances cultural awareness and creates a more inclusive and diverse workforce.’

Given the low ratio of BAME professionals at higher levels of management, it is encouraging to see discussion below board level, which may in turn create the necessary pipeline to effect change at all levels. However, with over two-thirds of companies giving no or very general disclosures in relation to ethnic diversity on the board, it would appear that for now we still have a way to go to meet the targets set out by Sir John Parker.

We explore the issue of diversity across FTSE 350 companies in greater detail in our upcoming AGM report, published later this year.