Chair tenure across the FTSE 350

Chair tenure across the FTSE 350

In July 2018 the revised UK Corporate Governance Code 2018 (UKCG Code) was published, which applies to accounting periods beginning on or after 1 January 2019. Amongst the recommendations is that the chair should not remain on the board longer than 9 years from their date of appointment to the board. Where this is not the case, the FRC states ‘this should be supported by comprehensive explanations which will help investors and other stakeholders better understand the long-term succession planning strategy.’

Market Tracker has conducted research into chair tenure periods across FTSE 350 companies with a financial year ending 1 April 2018 - 31 March 2019 (excluding closed ended investment funds).  The data showed that 33% of companies have a chair who has reached or exceeded the recommended tenure period, with a further 10% approaching the end of the recommended period within the next two years. 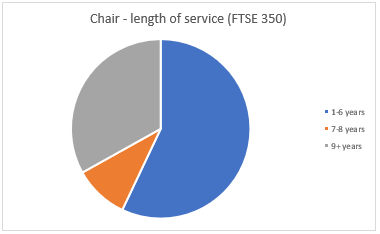 In several cases our research showed that although companies had only recently appointed their chair, they had already reached the 9-year point since the tenure period begins from the date of appointment to the board. A notable example is Crest Nicholson Holdings plc, whose chair Stephen Stone was appointed to the board in January 1999 yet was appointed as chair in March 2018. It will be interesting to note how companies in this position respond to the code changes next season, although it should be noted that the nine-year period ‘can be extended for a limited time, particularly in those cases where the chair was an existing non-executive director on appointment’.

Our research determined that disclosure in relation to chair tenure had been made when one of the following statements was included in the annual report: 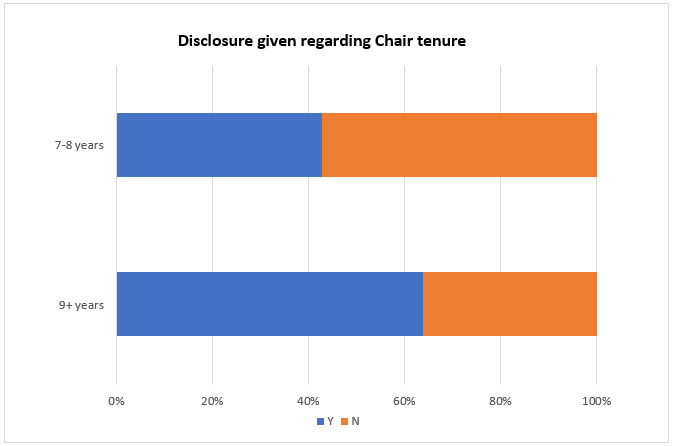 The level of disclosure greatly varied, with some companies providing detailed plans in relation to chair succession. An example can be found in the annual report of Homeserve plc, who note the recommendations of the UKCG allowing for an extension in order to ‘facilitate effective succession planning and the development of a diverse board, this period can be extended for a limited time’.  In line with this, Homeserve plc extended the chair’s term for a further 3 years, with the expectation that a full handover will be achieved by April 2020, with the following explanation:

‘The business has been through considerable change over the time Barry has been on the Board and has faced some challenges. Barry’s leadership has been key and we feel that his experience means that he brings very helpful perspective to our strategic discussions. In addition, the Board itself has undergone change in the last 12 months and there is a clear advantage to retaining Barry whilst the new Board members establish themselves.’

Alternatively, several companies have provided more generic reasons. This goes against the FRC’s ‘explanations guideline’, which specifies that disclosure should be personal to the company and not be ‘off-the-shelf’. For example in Greencore Group plc’s annual report they simply state:

‘The Board acknowledges that Mr PG Kennedy, the Group’s Chairman, is currently serving his tenth year as Non-Executive Director of the Company and his fifth year as Chairman of the Company. The Board is satisfied that Mr Kennedy remains key to the continuity of leadership of the Group.’

Our upcoming AGM season 2019 trend report, to be published next month, looks at this and other issues in relation to compliance with the UKCG Code in the annual reporting and AGMs of the FTSE 350. Whilst most companies who reached or exceeded the recommended tenure period provided some disclosure, we note that many companies were still applying the UKCG 2016 code during our research period. It is likely that disclosures in relation to chair tenure will increase in the 2020 season.