As predicted, the COVID-19 pandemic resulted in a worldwide increase in commercial arbitrations, as economies and supply chains came under pressure. Our annual analysis of the caseload statistics of six major international arbitral bodies shows that in 2020, for the second year running, all these organisations saw an uptick. The overall growth in the caseload for these bodies was 20% between 2019 and 2020. However, the growth in appointments of arbitrators was only two per cent. James Clanchy of the Lexis® PSL Arbitration team looks at the numbers and at what is behind them.

In the first of our annual analyses of arbitration caseloads, published in July 2018, we noted a year-on-year decline between 2016 and 2017—see: Arbitration statistics: a reality check.

This year, we were able to look at a full five years of caseload statistics. They are illustrated by the two graphs below.  The picture is healthier than it was in 2018.

The first graph shows an overall rise of 26% in the annual number of new arbitrations with all six bodies between 2016 and 2020. Only the International Chamber of Commerce (ICC) did not see more new cases in 2020 than in 2016 but it has explained that in that year an exceptional large group of related cases was filed.

The second graph shows a rise of just 6% in the number of arbitral appointments over the same five years, with one institution, the Singapore International Arbitration Centre (SIAC), seeing a drop in annual appointments from a high point of 341 in 2016 to 288 in 2020 (with some ups and downs in between).  The London Maritime Arbitrators Association (LMAA), whose terms and procedures are used in ad hoc arbitrations, accounted for more than half of the appointments across the six organisations in 2020, as it did in 2019. 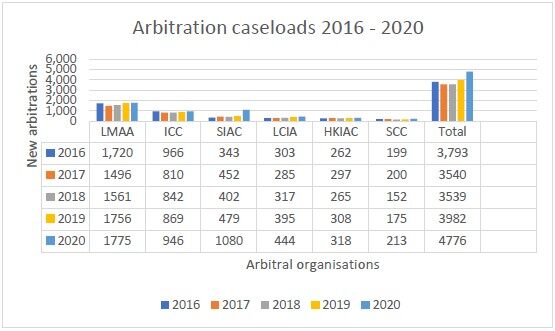 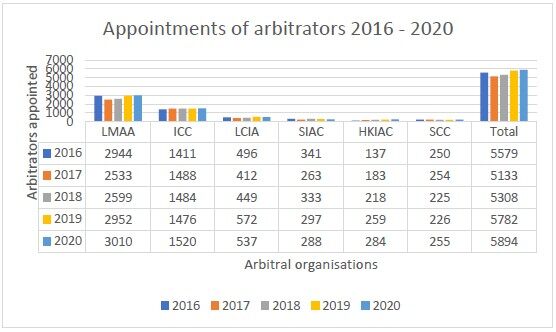 Is it an arbitration?

The shortfall between SIAC’s tally of new cases and the number of arbitrators appointed was discussed in April this year in our blog post: Arbitrations without arbitrators: an institutional paradox.

In July, Singapore’s minister of law, K Shanmugam, explained to the press that in 2020 SIAC had registered two large groups of cases, 261 and 145 respectively, making 406 in total. These cases would account for around one half of the difference between SIAC’s 1080 new arbitrations and its 288 appointments. The other explanations in our April blog post, including the nature of SIAC’s caseload and the relative costs of filing an arbitration and continuing it, may also play their part.

SIAC is unique among the six arbitral bodies studied because its number of appointments has consistently remained below the number of new cases since 2016. In that year the numbers were close to identical (343 cases, 341 appointments), so a ratio of one arbitrator per case. In 2020, the ratio fell to 0.3 arbitrators per case. Taking account of the 406 cases in the two groups mentioned above, the ratio would be 0.4.

Our analysis last year focussed on the increasing numbers of sole arbitrators—see: Arbitration statistics 2019: rise of the sole arbitrator.  That trend continues and explains, for example, the London Court of International Arbitration’s (LCIA’s) ratio of arbitral appointments to new cases: 1.2 in 2020, down from 1.6 in 2016.

This year, with its lower ratio of arbitrators to cases, SIAC’s statistics raise the question whether an arbitration without an arbitrator is really an arbitration at all.  Many definitions of ‘arbitration’ require the submission of a dispute to an arbitral tribunal. A request for arbitration which is delivered to an institution’s secretariat but does not subsequently reach an arbitral tribunal may more accurately be defined as a ‘filing’. On the other hand, while such filings may not merit the attention of the now 55,000 LinkedIn followers of the Chartered Institute of Arbitrators (up from 35,000 in 2019), they remain claims brought under arbitration agreements and, in that sense, could be considered to fall within the definition.

If all the cases in the above tables can be categorised as arbitrations, the next question is whether they are all international.

The six arbitral bodies in our analysis comprise the five most 'preferred’ international arbitration institutions, as found in the 2018 White & Case and Queen Mary University of London international arbitration survey, with the addition of the LMAA. The arbitrations conducted under the rules of these six bodies are predominantly international. However, in 2020, slightly fewer than half of the Stockholm Chamber of Commerce’s (SCC) new cases were international (105 out of 213). The LCIA reports that 82 of the 407 arbitrations administered pursuant to its rules involved parties from the UK on both sides and 26 arbitrations involved only UK parties. At the ICC, disputes between parties of the same nationality accounted for 31% of new cases.

There has been a change in the preferences for institutions as found in the Queen Mary/White & Case survey since 2018. In 2021, the China International Economic and Trade Arbitration Commission (CIETAC) entered the top five for the first time. According to CIETAC’s statistics for 2020, 739 of its 3,615 cases were ‘foreign-related’. This represented a 20% increase on 2019’s figure. On the basis of this trajectory, although it remains China-centred, CIETAC may become a candidate for inclusion in future analyses of arbitration statistics.

In sixth place in the Queen Mary/White & Case survey in 2021 came the International Centre for the Settlement of investment Disputes (ICSID).

The institution saw a record number of new cases in 2020: 58 (up from 39 in 2019). If added to the caseloads of the six organisations in this year’s analysis, ICSID’s tally would be 1.2% of the total number of cases for 2020 (4834). Its ranking in the Queen Mary/White & Case survey report reflects the experience of and perceptions held by that survey’s particular pool of respondents.

At the other end of the scale in terms of caseload is the LMAA, whose estimated 1775 new ad hoc arbitrations in 2020 (derived from numbers of appointments reported to it) is more than thirty times as big as ICSID’s. The association is not an institution but found itself mentioned by respondents to the Queen Mary/White & Case survey and came in at 10th place in terms of popularity.  As our graphs above illustrate, that ranking by the survey’s respondents is at odds with the actual use of the LMAA’s ad hoc procedures by commercial parties.

Maritime disputes fall squarely into definitions of commercial arbitration. Contracts for carriage by sea are fundamental to international commerce.  So too are standard form contracts for the sale and purchase of commodities, which are often submitted to arbitration administered by trade associations.

However, it is sometimes suggested that the relatively high number of small claims handled in LMAA arbitration, even if still a minority alongside larger ones, makes its caseload difficult to compare with those of arbitral institutions. In 2020, the LMAA saw a record 138 awards made under its longstanding Small Claims Procedure (SCP), rules for expedited arbitration, which are generally used for claims of less than US$ 100,000. The take up of the SCP might be considered a mark of success for the LMAA, particularly when institutions are looking to improve their own handling of smaller claims.

Claudia Salomon, the new president of the ICC’s International Court of Arbitration, has said that a key priority for her term of office is communicating to SMEs how the ICC can help to resolve low to medium value disputes, including through its expedited arbitration procedure, which she describes as a ‘resounding success’. See our blog post reporting on our interview with Ms Salomon: Client mindset takes centre stage under new ICC Court President Claudia Salomon.

The statistics confirm that there was a healthy rise in the number of new international commercial arbitrations commenced in the year which saw the COVID-19 pandemic, and its economic fallout, spread around the world. Arbitration clearly remains the resolution mechanism of choice for disputes arising from international commerce.

The much slower growth in the number of arbitral appointments over the last five years confirms that sole arbitrators are increasingly popular and also indicates that some providers may have work to do if cases filed with them are to reach the desks of arbitrators and if parties are to see arbitrators in action.

In addition to working for LexisPSL Arbitration, James Clanchy takes appointments as an arbitrator.  He is Honorary Secretary-Elect of the LMAA and a former Registrar and Deputy Director General of the LCIA.