International commercial arbitration was growing again before the COVID-19 pandemic hit, an analysis of 2019 statistics from six major international arbitral bodies shows. James Clanchy of the Lexis®PSL Arbitration team finds that this growth was largely in arbitrations before a sole arbitrator and in lower value cases.

The 2019 statistics show that London continues to dominate, not only as a seat but also as a hub for arbitration and as a source for arbitrators. Singapore has fallen behind in terms of the numbers of arbitrators appointed there. Ad hoc arbitration remains as strong as ever, and first choice in London, according to the data that is available for it. Overall, international arbitration, in its diverse forms, appears to be well-placed to absorb a surge of new disputes in the wake of the pandemic.

What are the practical implications of the 2019 statistics?

The 2019 statistics have implications for the conduct of arbitrations in the post-crisis economic landscape, for London in the post-Brexit environment, for institutions looking to grow their caseloads, and for arbitration practitioners and arbitrators hunting for new cases. These include the following:

What do the numbers show?

When we published the first of our annual analyses of statistics in 2018, we noted that, contrary to assumptions at the time, there had been a year-on-year decline between 2016 and 2017 in the total number of arbitrations commenced with six major arbitral bodies whose reported caseloads we studied. See our July 2018 post: Arbitration statistics: a reality check

In 2019, we found that the 2018 caseloads stabilised, the total being just one below 2017’s total. See our June 2019 post: Arbitration statistics 2018: London bucks downward trends

The figures for the four years 2016 to 2019 are illustrated in the graphs below. 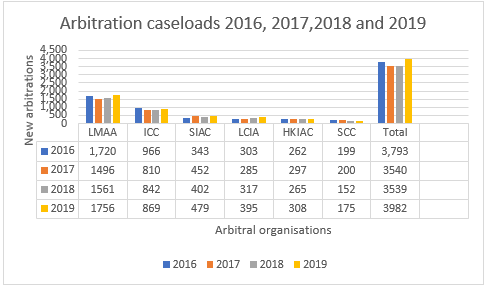 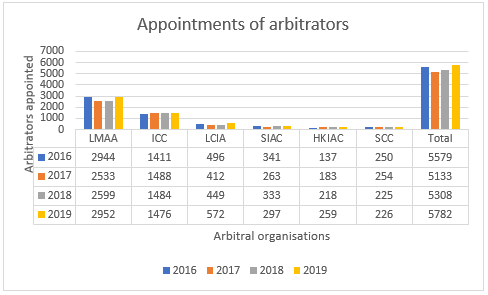 The six organisations chosen for our annual analyses correspond to the five institutions which were the most popular among respondents to the 2018 Queen Mary University of London White & Case international arbitration survey with the addition of the London Maritime Arbitrators Association (LMAA), whose Terms are probably the most widely used rules for ad hoc international commercial arbitrations.  In 2019, the LMAA had 44% of the cases across the six organisations and 51% of the appointments of arbitrators.

Meanwhile the Hong Kong International Arbitration Centre (HKIAC) reported that, of its 308 new arbitrations in 2019, 173 were administered under its own rules or under other rules, including the UNCITRAL Arbitration Rules.  Of the 122 appointments which the HKIAC made itself, 69.7% were sole arbitrators, 19 (15.6%) were in UNCITRAL Rules cases which it administered and a further 36 (29.5%) were in other ad hoc arbitrations.

This year has seen the publication of the Singapore International Dispute Resolution Academy (SIDRA) international dispute resolution survey. That survey did not look at ad hoc commercial arbitrations, even though SIAC noted on the front page of its statistical report that it had made 25 appointments in ad hoc arbitrations in 2019.  SIDRA asked about choices of arbitration institution and found that the five most popular were identical to the five chosen in the Queen Mary survey with the China International Economic Trade Arbitration Commission (CIETAC) being substituted for the Stockholm Chamber of Commerce (SCC).

Historically, CIETAC has not been regarded as a truly international institution but in 2019 it had 617 foreign-related cases, of which 66 were cases where both parties were non-Chinese, representing an 18.2% year-on-year increase.  In this regard, it is interesting to note that the SCC had only one third more international cases in 2019 (88) and that 25% of the International Chamber of Commerce’s (ICC) 2019 cases were between parties of the same nationality.

SIAC was the most popular choice for respondents to the SIDRA survey.  As the data shows that the majority of SIAC tribunals comprise a sole arbitrator appointed by the institution, the question arises as to whether these are, in fact, the features that attract its commercial users.  The SIDRA survey does not ask this question and concentrates instead on parties’ choices of arbitrators for appointment to three-member tribunals.

Other surveys and organisations likewise assume that most arbitrations are put into the hands of three-member tribunals appointed by the parties.  During the COVID-19 crisis, many webinars and blogs have also assumed that most arbitrations go to in-person hearings on the merits.   Not only do the institutions’ statistics, together with those that they don’t always supply (eg numbers of awards), indicate that full-blown proceedings before three-member tribunals are the exception, they also confirm that there has been an increase in the take-up of documents-only and expedited procedures before sole arbitrators for lower value cases.

For example, the International Chamber of Commerce’s (ICC) Expedited Procedure Provisions, for claims up to $US 2m, applied by direct operation of the ICC Rules in 65 cases and parties opted out of them in just five.  In 2019, 36% of the ICC’s arbitrations concerned claims which did not exceed US$ 2m.  When called upon to choose the number of arbitrators for a tribunal, the ICC Court chose sole arbitrators in 82% of cases.  Overall, 41% of ICC tribunals in 2019 comprised a sole arbitrator.

Meanwhile at the LCIA, which does not have a separate expedited procedure but where 72% of quantified claims were US$ 5m or less and 43% were US$1 m or less, 46% of tribunals comprised a sole arbitrator.

In 2019, the LMAA saw a record number of appointments of sole arbitrators under its Small Claims Procedure, which is largely used for claims below US$100k: 218.

London goes from strength to strength

In 2016, in the wake of the Brexit referendum, it was suggested that London would lose its popularity as a seat for international commercial arbitration.  Attention was drawn to the ICC’s statistics at the time, which indicated that London was already being chosen less often as a seat in ICC arbitrations.

Not only have the LCIA’s and LMAA’s caseloads proved those pessimists wrong (for the time being at least), so has the ICC itself: in 2019, London was the most popular seat for ICC arbitrations, being designated 115 times.  Adding that number to the LCIA’s and LMAA’s caseloads, London-based arbitrations account for 57% of the total number of cases across the six arbitral bodies studied.

Meanwhile HKIAC reported that British arbitrators had the highest percentage of its arbitral appointments by nationality (24.1%).

It is, of course, necessary to keep an eye on the institutions and other organisations which do not feature in the above analyses or so heavily in surveys.  Well-established institutions, such as the Deutsche Institution für Schiedsgerichtsbarkeit e.V.(DIS) in Germany and the Vienna International Arbitral Centre (VIAC) in Austria, continue to prosper but their international caseloads remain relatively low. One institution which has experienced quite substantial growth in the last few years is the DIFC-LCIA Arbitration Centre in Dubai, which saw 80 new cases in 2019, up from 64 in 2018.  Its link with London may be part of the secret of its success.

In our conclusion last year, we noted that the rise of new centres may require that a new set of arbitral bodies be analysed in future years. The continuing dominance of London and the appearance of four of our five institutions in the SIDRA report's ranking suggest that that time has not yet come. The turmoil of 2020 could, though, change the landscape.