Law degrees could help save UK universities from the brink

Law degrees could help save UK universities from the brink

Revenue can be somewhat of a dirty word in the world of Higher Education. For educators who have dedicated their careers and lives to teaching – inspiring generation after generation with a passion for their subject while equipping them with the knowledge and tools to succeed in the real world – narrowing everything down to revenue alone will go against the very purpose of many.

However, with the reality that universities having lost anywhere between £3.1-£18.6 billion in revenue in the last 12 months, up to half of their average annual income, according to a newly published report by LexisNexis, it’s time for universities to start talking revenue.

Comparatively cheap to run, well respected by the international community and easily delivered through blended learning – law courses can get universities back on track.

Universities are losing income, and fast

In the wake of Brexit, there was concern that the knock-on effect on student numbers would be significant. However, in 2019 the Office for Students deemed the financial sustainability of higher education ‘reasonable’, and the sector closed the 2018/2019 year with a surplus of £1.4bn.

The pandemic, on the other hand, was not so kind to the academic sector. One of the biggest losses to income was from the sharp decline in international students – estimates suggest that this income stream was halved in 2020.

The outlook is equally uncertain with UK-based students, with 86% of students say online learning isn’t worth the cost of tuition – many are demanding full or partial refunds.

This puts admissions numbers – and income – in jeopardy. Financial losses of this magnitude represent a serious threat to many universities. Though bailouts have offered a temporary salve, at least 13 universities are still at risk of going bankrupt.

Law degrees are seen as a ‘safe bet’ by students

Despite initial fears and continued turbulence, university admissions increased by 3.5% in September 2020, during the height of the pandemic.

Law, above almost any other undergraduate degree subject, is seen as a ‘safe bet’ by students. It consistently ranks in the top 3 most popular subjects. The UCAS figures for the January 2021 application deadline show that law applications increased dramatically in 2021 vs 2020 (9.3%). 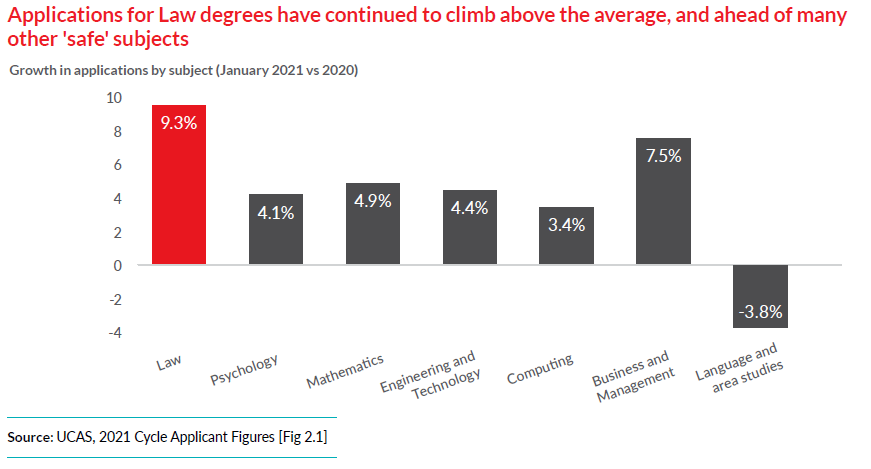 The popularity of law shouldn’t come as a surprise: vocational subjects fare well in times of crisis. After the 2008 financial crisis, there was a big increase in demand for law degrees – and a similar pattern is emerging now.

While applications to UK universities from abroad have dropped during the pandemic, applications to study law have returned to growth (3% in 2021 compared to 2020, vs -4% across all subjects).

It’s no longer enough to sell to students on prestige. If they’re spending £9k on tuition – and partially remote tuition at that – they expect tangible job prospects. With employment markets increasingly volatile – who’d blame them?

The UK’s unemployment rate currently stands at 5% and could rise as high as 7% by the end of the year, once furlough schemes end. Almost half of job losses so far have been among the under 25s – i.e. recent graduates.

Unemployment among young people aged 16-24 is much higher than average, at 15%. It’s no wonder, then, that the National Union of Students found that 81% of students are concerned about their job prospects and 71% about their employability.

This general sense of the employability of law students is borne out by the facts. Employment outcomes from Law degrees are strong, with an average employment rate of 74% within six months of graduation. After 15 months, 95% of law graduates are employed.

Read the full LexisNexis report here to see exactly how universities can maximise the value of law degrees and save the Higher Education sector.

Stealing the market: the degree that now has infinite value
Future of Law | 4 min read 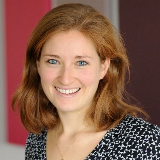