Number of deaths reported to coroners in 2020 lowest since 1995

Number of deaths reported to coroners in 2020 lowest since 1995

The Ministry of Justice (MoJ) has published data on deaths reported to coroners in 2020 in England and Wales. As the dataset spans the coronavirus (COVID-19) pandemic, the MoJ warns that caution should be exercised when comparing the statistics to those from previous years as the Coronavirus Act 2020 introduced temporary easements to death management and affected the way deaths have been reported to coroners. The data shows that, in 2020, the number of deaths reported was lowest since 1995, deaths in state detention were up by 18% as compared to 2019, 7% more inquests opened, and 34% of all registered deaths were reported to coroners. In addition, it has taken on average 27 weeks to complete and inquest, while 30,900 inquest conclusions were recorded, amounting to a 1% decrease from 2019.

The statistics further show that:

'Given that 2020 has seen an excess of deaths from the coronavirus pandemic and unprecedented pressure of the NHS you would expect that the figures would be much higher. However, in the Coronavirus Act 2020, the government changed legislation on the reporting requirements and death certification process which has resulted in less deaths being reported to the Coroner. Most deaths in 2020 were attributed to natural causes.

It appears that the number of referrals to a Coroner may have been more appropriate as the number of inquests opened increased by 7% in 2020. 205,400 deaths were reported to a Coroner and 32,000 inquests were opened. This appears to show that a referral, upon review by a Coroner, resulted in a decision to open the inquest more often that previous years.

As anticipated by those working in this area of law, the number of concluded inquests has fallen. There is a large backlog of inquests that have been opened but not listed for final hearings owing to the ongoing restrictions impeding court hearings. Families are continuing to struggle with the fact that the process is not concluded and they have been unable to find the answers they are seeking about their loved one’s death.

The concern for clinical negligence solicitors, is that failings in care, particularly in hospitals and care homes, are often identified by family members. Following a death, it is the family that insist on a referral to the Coroner that results in an inquest being opened. The restricted visiting may have led to families being less informed and being unable to raise concerns that they may have previously.'

The full document detailing out the 2020 statistics is available here. 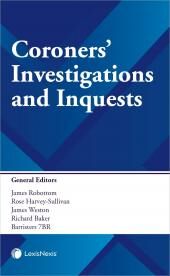