Flurry of takeover activity as deal activity levels bounce back

Flurry of takeover activity as deal activity levels bounce back

As we approach the final stretch of 2020,  Market Tracker’s preliminary data suggests that following a particularly slow first half of the year, an increase in deal activity, as reported in our Q3 2020 update, has continued through October and into November. 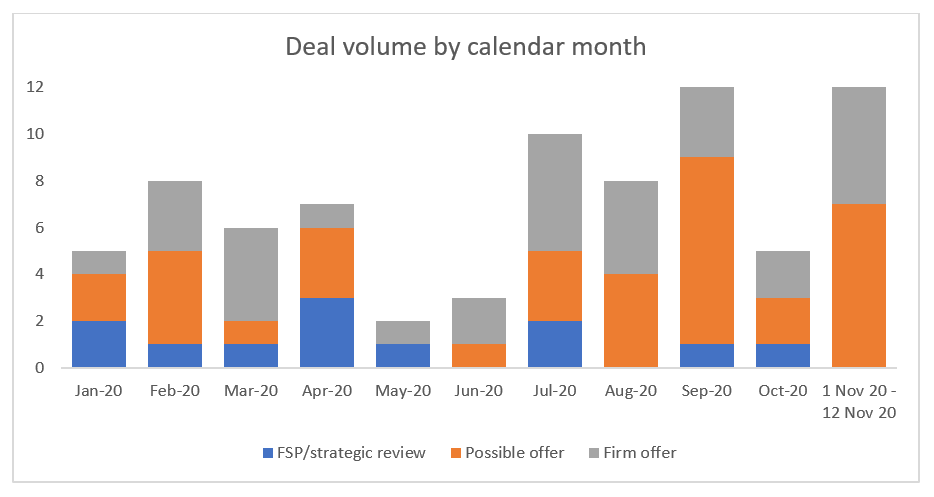 The first 2 weeks of November have been particularly busy, with five firm offers and seven possible offers already announced. This includes what is likely to end up as the largest takeover transaction of 2020 so far, a joint £7.2 bn offer for FTSE 100 RSA Insurance Group by Canadian insurers, Intact Financial Corporation, and Danish insurers, Tryg A/S. Should a firm offer be announced, the deal value will represent more than double that of GardaWorld’s £3bn hostile offer for FTSE 250 security specialists G4S, currently the highest transaction by value in 2020 to date. The offer would also be larger than Takeaway.com N.V’s £6.25 bn offer for Just Eat plc, which was the biggest firm offer of 2019.

The offer, which sees Tryg contributing £4.2bn, and Intact £3bn, is subject to several pre-conditions, including due diligence and approval by the board of RSA. While a definitive recommendation is yet to be made, RSA’s board have indicated that they would be minded to recommend the proposal. It is intended, should the offer go through, that Intact would retain RSA’s Canadian, UK and international operations and obligations, with Tryg retaining RSA’s Swedish and Norwegian operations and both insurers co-owning RSA’s businesses in Denmark. The announcement saw RSA’s share price rocket, closing 46% higher at 670 pence per share on 5 November 2020.

The property sector has been particularly popular amongst bidders in recent months, ranking as the most active alongside Healthcare and Computing & IT, and accounting for 12.5% of all firm offers in 2020. This may be attributable to the impact of the pandemic on listed companies in the property sector, which has seen them trading considerably lower since March 2020. The past week has seen two targets in the property sector, with a firm offer for Urban&Civic plc by the Wellcome Trust, and a possible offer for Countrywide plc by competitor, Connells Limited. Commenting on the possible offer, Connells highlighted that Countrywide is in urgent need of recapitalisation, referring to comments made by the board of Countrywide that illustrate that the company ‘is unlikely to be able to execute its business strategy over the short and medium term and there is a risk that it could end up in administration, with Countrywide shareholders losing all or a substantial portion of their investment’. Connells further went on to state its belief that Countrywide is in need of new management, stating that this new team would be faced with an ‘enormous’ challenge of turning around the business, which has lost over £500 million pre-tax in the last three calendar years. Notably, Countrywide was subject to a possible offer earlier this year in February by LSL Property Services plc, however LSL soon backed out the following month, giving no reason for its decision not to proceed (for more on this, see LSL backs out of Countrywide merger).

Building on the growing trend of foreign investment in UK public M&A deals, (see also Foreign companies in UK shopping spree) US-based companies have accounted for a further three bids announced in the last week alone. This includes two possible offers, where both targets rejected the offer on the grounds that it undervalued the company and its prospects. US fund manager, Standard General, announced on 5 November that it had made several approaches regarding a possible offer for online gambling company Sportech plc. Its latest offer, on 28 October 2020, was a cash offer of 28.5 pence per share, valuing Sportech at £53.8 m. The rejection by the board of Sportech resulted in Standard General taking the offer public for shareholders to consider, in an attempt to force discussions. Similarly, on 12 November 2020, resource and tech-based company, Mineral Technologies Inc, went public with its proposal for Elementis plc after the board of Elementis rejected its initial approach on 5 November of 107 pence per share.

In contrast, the last of the three US bids made this week appeared to be on far more amicable terms. New York based video game developers, Take-Two Interactive Software, announced a possible offer for British video game developers Codemasters on 6 November 2020. The companies shortly after agreed to the terms of a recommended cash and shares offer which values Codemasters at £759 m.

For in-depth analysis of trends in UK Public M&A in 2020, look out for our Market Tracker full year trend report, to be released in Q1 2021.