Borrie and Lowe: The Law of Contempt Fourth edition (Part of the Butterworths Common Law Series) 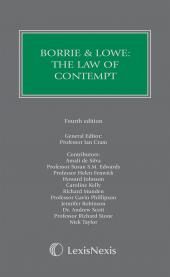 Why you should buy Borrie and Lowe: The Law of Contempt Fourth edition (Part of the Butterworths Common Law Series)

The leading authority in its field, Borrie and Lowe is a comprehensive statement of the law relating to criminal and civil contempt of court. Regularly cited in the Courts, this substantial and authoritative title is also highly regarded by members of the press.

In its fourth edition, the work includes chapters incorporating:

* Human Rights Act 1998
* Children and Young Persons Act 1933
* Youth Justice and Criminal Evidence Act 1999
* Civil Procedure Rules - alternative approaches to prejudicial publicity and how it impacts on different sets of proceedings, recent common law and statutory developments
* Discussion on journalists' privilege of non-disclosure of sources
* Discusses the growth of digital publications via the Internet and the problems it may cause for jurors - e.g. assuming the guilt of a defendant
* Considers whether publication on Internet sites such as Facebook etc. fall into the 'strict liability' contempt under the Contempt of Court Act 1981
* Considers whether search engines such as Google and Yahoo are responsible for prejudicial material published on the Internet that may be liable for contempt

Senior Lecturer in Consumer Law at University of Wales, Bangor.

View all books by Howard Johnson (1)

View all books by Justice Sedley (1)

Joint Director of the Human Rights Centre and Consultant at Doughty Street Chambers.

View all books by Helen Fenwick (2)

View all books by Caroline Kelly (1)

View all books by Richard Munden (1)

Dean of Law, University of Buckingham

View all books by Nick Taylor (1)

View all books by Gavin Phillipson (1)