The must have publication on Res Judicata.
by Mr Justice K R Handley (Author) 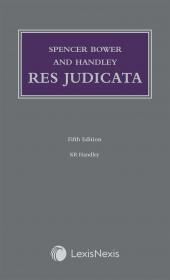 Why should you buy Spencer Bower and Handley: Res Judicata Fifth edition

The most authoritative and comprehensive book available on the limitations imposed by the doctrine of Res Judicata.

Part One deals with res judicata estoppel in its three forms: cause of action estoppel, issue estoppel and the binding force of a judgment when it is the foundation of a new action. The application of these principles in specific areas of the law and the plea of autrefois acquit in criminal cases are then considered. A chapter deals with affirmative answers.

The 5th edition will incorporate developments in England and Wales and in Commonwealth jurisdictions. Relevant decisions in the Supreme Court include:

In the Court of Appeal:

Judge of the Court of Appeal of New South Wales