Halsbury's Statutes of England and Wales

Halsbury's Statutes of England and Wales provides the user with an up-to-date version of the amended text of every Public General Act and Church of England Measure currently in force.

Halsbury's Statutes comprises the statute law of England and Wales from the earliest times to the present day. The current edition of Halsbury's Statutes provides the user with an up-to-date version of the amended text of every Public General Act and Church of England Measure currently in force, and also of a number of private and local Acts.

Halsbury's Statutes is easy to use with statutes grouped under an alphabetical title scheme covering the main areas of legal practice similar to that in other LexisNexis Major Works. Each Act is fully annotated to provide precise information relating to:
* Parliamentary debates
* Amendments and repeals
* Derivation notes in the case of consolidating legislation
* Commencement
* Cross-references to other provisions of the Act and to other relevant provisions in Halsbury's Statutes
* Cases
* Words and phrases judicially considered
* Subordinate legislation
* References to words specifically defined in the Act

Volumes are revised and reissued when necessary to take account of changes in law and practice and are charged for separately on publication.

Halsbury's Statutes is updated regularly by an annual Cumulative Supplement (charged separately on publication) and a comprehensive updating service which includes the texts of statutes published since the reissue of the main volumes (charged annually).

The following consolidated publications complete the Halsbury's Statutes set and are charged separately on publication:

For details of the options available above and the prices for the accompanying publications to the main work please contact Customer Services on 0845 370 1234. 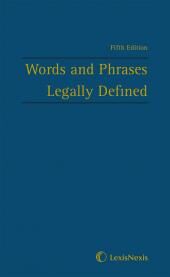