Plucking the Goose: A Century of Taxation from the Great War to the Digital Age 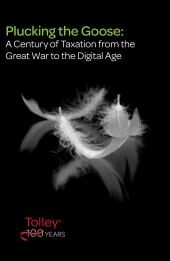 Why should you buy Plucking the Goose: A Century of Taxation from the Great War to the Digital Age?

All profits from the book will be donated to the Chartered Institute of Taxation’s Bridge the Gap initiative.

The book is being published by Tolley to celebrate its centenary year in 2016. Featuring a series of essays and contributions from leading tax figures - including politicians, policy-makers and practitioners - the book charts the modern development of the British tax system since Charles Tolley published the world's first tax card of rates and allowances in 1916.

Among the themes explored are:

* Why the First World War had such a critical impact on income tax, and how UK taxation has developed since then, with the part played by each of the major taxes
* From squeezing the rich to incentive-based taxes, and why the single most important change in the income tax regime came with the Thatcher reforms of the 1980s
* From direct to indirect taxation; the impact of joining the Common Market and the future for VAT in the post-Brexit era?
* Corporation tax - from 52% to Google, and the development of the anti-avoidance landscape
* The correlation between tax revenues and the benefits system
* The changing role for investigation and regulation, and how the tax profession has developed alongside
* The 'State of Tax Today' - the widening of the tax debate, greater public scrutiny and trust, and the ongoing need for simplification of the longest and most complex tax code in the world
* On the horizon for taxpayers - 'Making Tax Digital', HMRC's Business Tax Roadmap and what next after BEPS (the Base Erosion and Profit Sharing) initiative
* Principles of tax - the potential for redrawing the parameters upon which taxation is presently based, including concepts of residence, source and accounting profit

It includes an innovative fold-out timeline highlighting the main events from the Tolley centenary that have shaped the modern tax code and the tax profession.

All profits from the book will be donated to the Chartered Institute of Taxation's Bridge the Gap initiative that supports the work of the two tax advice charities, Tax Aid and Tax Help for Older People.

View all books by David Smith (1)

View all books by John Cullinane (1)

Director of the Institute of Fiscal Studies

View all books by Paul Johnson (1)