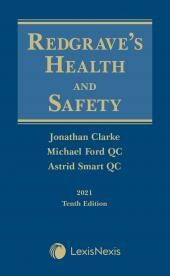 Why should you buy Redgrave's Health and Safety Tenth edition

Redgrave's Health and Safety is a leading authority on health and safety law and practice. It sets out key legislation in the field of health and safety at work, including commentary on significant Acts and Regulations; references to both English and Scottish cases, with concise commentaries on the case law; and a thorough source of fully annotated legal materials with additional commentary from the general editor and contributors. The title's logical and coherent structure and user-friendly format makes it accessible and easy to use - even in court. Every practitioner serious about health and safety relies on Redgrave's Health and Safety for expert guidance on the subject.

Key updates covered in the new 10th edition include:

Despite some eight years having now passed since section 69 of the Enterprise and Regulatory Reform Act 2013 abolished civil liability for injuries caused by an employer’s breach of a statutory health and safety duty, the question of what relevance such a breach has to a common law damages claim remains largely unanswered. There has been a trickle of first instance decisions from both England and Wales and Scotland which contain oblique obiter dicta relating to the point. At the time of writing (November 2021), a fully argued and reasoned appellate authority is still keenly awaited and is now overdue.

View all books by Jonathan Clarke (1)