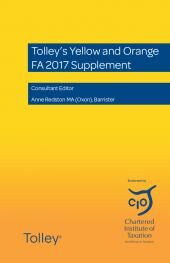 Why should you buy Tolley’s Yellow and Orange FA 2017 Supplement?

Tolley's Yellow and Orange Tax Handbooks - FA 2017 Supplement is a companion text to complement Tolley's Yellow and Orange Tax Handbooks. The Supplement reproduces Finance Act 2017 in full and includes key extracts from existing tax legislation as amended by the Act. For example, the Sch 2 "optional remuneration arrangements" amendments are set out in ITEPA 2003 Parts 3 and 4, both of which are included in full. The Supplement will ensure that you have access to consolidated, up-to-date UK tax legislation in an easy-to-use, single volume. By virtue of the unexpected General Election on 8 June 2017, the Finance Bill was truncated and rushed through Parliament before dissolution. This Supplement will ensure that you are up-to-date with all the key changes to the legislation.

Why you need this book: