The Modern Judge: Power, Responsibility and Society's Expectations provide for every circumstance and so its application often involves the exercise of discretion.
by Mark Hedley (Author)
Publisher: Family Law 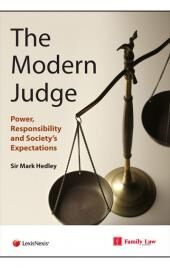 Why should you buy The Modern Judge

As society becomes more complex, so does the law. However, law cannot provide for every circumstance and so its application often involves the exercise of discretion. Criminal sentencing, child welfare, the protection of those who lack mental capacity and disputes about medical treatment are obvious examples. How do judges go about that? How far are judges influenced or affected by their backgrounds, beliefs and own life experiences? And, if consistency is an aspect of public justice, can that be achieved? And what about the conflict between public justice and personal privacy? Many see these as pressing questions in a society where judges have perhaps greater effective power than ever before.

Sir Mark's aim in this book is to be frank rather than scholarly about judging. The trial judge is in a very different position to the appellate judge. The trial is where the facts are determined and it is essentially a trail judge who exercises the powers of discretion which modern society increasingly vests in its judiciary.

"Sir Mark Hedley conveys in a very short compass the fruits of a lifetime in the law, and displays the wisdom that made him one of the most respected family and Court of Protection judges.  In a series of short chapters, originally delivered as lectures at Liverpool Hope University, Sir Mark asks profound questions as to the place of the judge in society and to the basis and justification for their role in determining cases involving the welfare of children and those falling within the scope of the MCA 2005 ... I would very strongly recommend this short but profound to book for anyone concerned not just with the role of the judiciary in the context of children and incapacity, but also with the wider balancing exercise between protection and autonomy that is required in both of these spheres by others outside the courtroom" Alex Ruck Keene, Barrister, www.mentalcapacitylawandpolicy.org.uk

"I did very much like Sir Mark Hedley’s little book, The Modern Judge. It is really little more than an extended essay, but it is characteristically humble, thoughtful and thought provoking. It asks some very important questions, and they are questions that we ought to be asking – amongst ourselves within the legal community, and discussing with other members of society ... not only cover the Family Court and Court of Protection, but it does take those jurisdictions as its main focus, and it is through a conscientious consideration of the wide ranging and really very draconian of powers that Hedley is able to ask wider constitutional questions about the rule of law and the societal consent that is required for judges to exercise their powers" Lucy Reed, Pink Tape

"based on a series of public lectures given in 2015, this little gem of a book on the modern art of judging should be required reading for anyone seriously interested in law and the judicial system. As a former High Court and before that circuit judge, Sir Mark Hedley brings to his reflections a vast experience of criminal, civil and especially family cases. His observations on his role as a judge are timely and illuminating" Paul Magrath, www.iclr.co.uk

"what a pleasure to read! It’s great to be able to hear from members of the Judiciary what they think in 21st century, especially on matters such as family law. And The Modern Judge gives us a particularly powerful statement on what the public expect of their judges in 21st century" Phillip Taylor MBE and Elizabeth Taylor, Richmond Green Chambers

“some judges write memoirs, a rather dubious literary genre” but that is not the case here, thank goodness" Sir James Munby, Foreword