Provides practitioners with an analysis of the law from both the landlord's and the tenants' point of view
by Anthony Radevsky (Author), Wayne Clark (Author)
Publisher: Jordan Publishing 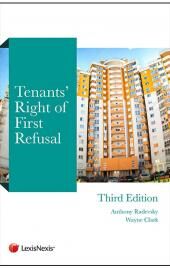 Why should you buy Tenants' Right of First Refusal

Tenant's Right of First Refusal is a thorough and authoritative guide to all aspects of residential tenants' right of first refusal under the Landlord and Tenant Act 1987. It provides practitioners with an analysis of the law from both the landlord's and the tenants' point of view, guiding the reader through the intricacies of an Act described by the judiciary as 'ill drafted, complicated and confused.' This new edition has been fully updated to take account of the latest case-law such as Artists Court Collective Ltd v Khan [2016] EWHC 2453 (Ch).

It is now nearly nine years since the publication of the Second Edition, and we consider that the time is ripe for a new one. There have been several important cases decided since 2008, some under the Landlord and Tenant Act 1987, such as Artists Court Collective Ltd v Khan (2016), and others under the Leasehold Reform, Housing and Urban Development Act 1993, which provide guidance on similarly-worded provisions. Read the full preface...

1.1 The Landlord and Tenant Act 1987 (‘LTA 1987’) was enacted following the Report of the Committee of Inquiry on the Management of Privately Owned Blocks of Flats (October 1985) chaired by Edward Nugee QC. That Report had considered the strong support in the evidence it had gathered for a general right to collective enfranchisement,1 but had concluded that giving tenants a right of first refusal when the reversion was disposed of by their landlord would suffice,2 given that they also proposed a right to have a manager appointed in the event of serious default by the landlord. The Report did not append a draft Bill, but a suggested procedure was outlined in the body of the Report.3 A right to collective enfranchisement would have to wait for 6 more years.4 Read the full introduction...

By far the best source of all the relevant material
by The Conveyancer and Property Lawyer
"This detailed specialist book has been written by two experienced authors from Falcon Chambers... provides invaluable guidance not only to conveyancing solicitors, but also other barristers like myself who find themselves pitted against the authors... This book is by far the best source of all the relevant material gathered together in one place and provides detailed commentary on most of the issues which arise in practice. It is extremely good value... a must buy for anyone practising in this area, given the risks of getting things wrong."
Essential reading
by Landlord and Tenant Review
"A new edition of Anthony Radevsky and Wayne Clark’s specialist work will be welcomed by lawyers, surveyors and others who work in the field of residential long leases... essential reading for all who have to deal with transactions where the right of first refusal may apply..." 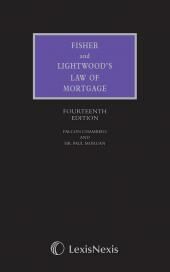 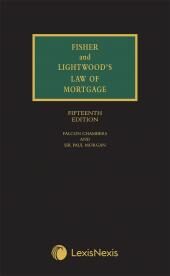