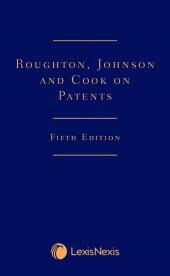 Why should you buy Roughton, Johnson and Cook on Patents, Fifth Edition


Roughton, Johnson & Cook on Patents (formerly known as the Modern Law of Patents) is an essential resource for patent lawyers and patent attorneys. The title offers a fresh and comprehensive exposition of law and procedure relating to patents in the UK and Europe; and includes key precedents and court forms, covers useful historical information and materials, and also explores recent and future developments in patent law in one handy volume.

Now in its fifth edition, the title will be fully revised and updated to take into account all the latest developments since the last edition, and will include coverage of:

On 31 December 2020, European Union law ceased to apply to the United Kingdom. In many respects, however, the changes brought about were minor. The corpus of EU law has been ‘retained’ as part of the domestic legal system and so largely remains unaffected. In patent law, in contrast to other intellectual property rights, the inroads made by EU law were far less significant in the first place. Nevertheless, there have still been changes. The supplementary protection certificate system is now much more complicated due to the differing regimes for authorising medicines and plant protection products in different parts of the United Kingdom and, likewise, the customs rules are slightly different between Great Britain and Northern Ireland.

View all books by Ashley Roughton (2)

View all books by Phillip Johnson (1)

View all books by Trevor Cook (2)