A popular and practical step-by-step guide to the law and procedure for renewing business tenancies under Part II of the Landlord and Tenant Act 1954.
by Graham Fife (Author)
Publisher: Jordan Publishing 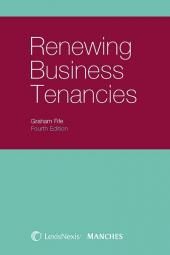 Why should you buy Renewing Business Tenancies Fourth edition

Renewing Business Tenancies is a popular and practical step-by-step guide to the law and procedure for renewing business tenancies under Part II of the Landlord and Tenant Act 1954, which was radically altered by the Regulatory Reform Order. This latest edition has been substantially revised to incorporate new developments such as Lay v Drexler (2007) (tenant's liability for cost if the tenant discontinued renewal proceedings); Trans-World Investments Limited v Dadarwalla (2007) (concerned the Court's calculation of the new rent under s 34); Wessex Reserve Forces and Cadets Association v White (2005) (landlord was opposing the grant of a new lease on the ground that it intended to redevelop); and Fowles v Heathrow Airport Limited (2008) (effect of the tenant's (flagrant) breach of planning law on a landlord's case for objecting to the grant of a new lease). A new chapter on Contracting Out (of the security of tenure provisions) has been added together with the appropriate forms.

Also included are Checklists of Information, Part II of the 1954 Act (as amended by the 2003 Order), and numerous helpful tips for advisers to both landlords and tenants.

View all books by Graham Fife (1)