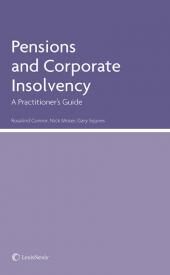 Why should you buy Pensions and Corporate Insolvency: A Practitioner's Guide

There are some important developments in pensions and insolvency notably the Supreme Court decision pending in Bloom v The Pensions Regulator which focuses on the Regulator's rights where it issues its notice after the commencement of the administration of the recipient.

At the same time, the Regulator continues to assess its ability to impose its powers in the UK and overseas following the decision in Sea Containers Limited. At the same time, its contribution notice in relation to the Bonas Group Pension Scheme was settled at a much reduced figure out of court, following some significant criticism of its approach in Michel van der Wiele v the Pensions Regulator 2011. All of this happens in the context of the English common law's position on the enforcement of foreign judgments having been further refined by the Supreme Court's October 2012 decision in Rubin v Eurofinance.

Against this background Pensions and Corporate Insolvency: A Practitioner's Guide sets out to explain law and practical issues that arise in pensions and insolvency. It covers the pensions law and institutions, powers of the regulators and the establishment of the PFF, sets out the process for preparing for an insolvency including financial assessment, negotiating with the parties involved and competing interests, how to structure the insolvency in terms of moving the liabilities away from the operating company and explains how to handle the assessment and PFF entry. There is also coverage on avoiding negotiation and the regulator risks. Other areas covered include solvent restructuring and international issues relating to exporting the Regulator's powers.

The purpose of the book is to set out the laws and practices relating to pensions within the context of insolvency. It will start with a brief summary of the issues, followed by details of the process to be followed, tactical and structuring issues relating to the various forms of insolvency, restructuring options and the regulatory bodies. The effect on an international group will also be covered.

View all books by Rosalind Connor (1)

View all books by Nick Moser (1)

View all books by Gary Squires (1)