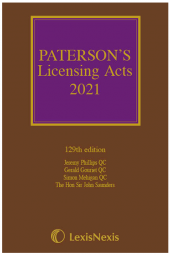 Why should you buy Paterson's Licensing Acts 2021 including CD-ROM

Paterson's is the definitive reference work on licensing law in England and Wales, providing a comprehensive and up-to-date source for practitioners. In one volume, it gives a detailed and clear analysis of new and forthcoming changes in licensing law and incorporates all relevant legislation, regulations, orders, standard forms and precedents.

This authoritative work provides a summary of the major changes in the licensing laws of England and Wales over the past 12 months. The accompanying CD-ROM is an easy-to-search version of the book, which also features historical materials no longer included in the print copy.

In 1872 James Paterson, MA and Barrister-at-Law of Goldsmith Chambers took up his quill pen - an expensive Royal Swan, we like to imagine - and sat down to write the eponymous Paterson’s Licensing Acts. Little could he have imagined that 148 years later Paterson’s would be maintaining its century-old position as ‘the bible’ of all licensing practitioners, itself being cited in over sixty decisions from the High Court to the House of Lords (as was) as the authority for a particular proposition or point of law.

Over the past near century and a half Paterson’s has been the witness to many changes including: six British monarchs, two World Wars and one General Strike. Its 128 editions (initially it was published biennially) have been a reflection of the passing times, from early advertisements praising the merits of the Licensed Victuallers Association in protecting the commercial interests of its members to the roughness of pages reflecting the shortage of quality paper in the aftermath of WWI.

The year 2020 opened as a period of relative inactivity on the licensing scene, with few significant judicial decisions or legislative measures for Paterson’s editors to report in their half-yearly update. This initially caused a minor concern. The Coronavirus pandemic changed all that at a stroke, transforming the licensing landscape more radically than any other event since the first (very modest, pocket-sized) edition of Paterson’s hit the press in 1872 (the same year that Queen Victoria opened the Albert Memorial in memory of her prince, and Wanderers F.C. defeated Royal Engineers A.F.C. 1–0 at The Oval in the first ever final of the FA Cup, the world's oldest football competition).

The next edition of Paterson’s Licensing Acts includes:

View all books by David Wilson (2)