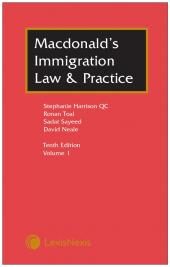 Why should you buy Macdonald's Immigration Law & Practice 10th edition

The eagerly awaited 10th edition of Macdonald's Immigration Law & Practice provides detailed coverage of all aspects of UK Immigration, Asylum and Nationality legislation. The book is the leading work in this area of law, now available in a user friendly format, offering commentary, supporting legislation and case law. Ensuring that practitioners are kept up to date on the recent major changes in immigration law, such as the impact of Brexit for EEA nationals and the latest on UK immigration and asylum law.

View all books by Ronan Toal (1)

View all books by Sadat Sayeed (1)

View all books by David Neale (1)