It covers the application and regulation of licences, and sections of the book dealing with local authority decision making now include the new laws on the Code of Conduct for councilors.
by Kerry Barker (Author) , Guildhall Chambers (Author)
Publisher: Jordan Publishing 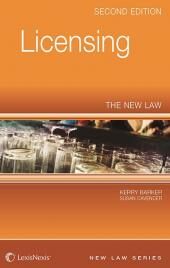 The Licensing Act 2003 marked a major shift in licensing law and practice by introducing a new and unified system of alcohol and entertainment licensing. All of those involved in implementing, enforcing and advising upon the new regime need to have a detailed knowledge of the Act and subsequent regulations and guidance.

The second edition of this popular guide has been extensively revised and updated to provide complete coverage of the new regime which came into force in November 2005, with references to the final version of the Secretary of State's guidance. It covers the application and regulation of licences, and sections of the book dealing with local authority decision making now include the new laws on the Code of Conduct for councillors.

The authors, both practitioners and specialists in this area, give a clear and coherent account of the new regime and explain its implications for licensing practice. They address the practical issues and problems surrounding the Act, including those which have become apparent during the lead up to the implementation of the legislation. The book reproduces the Act in full, together with all the regulations and guidance.

View all books by Kerry Barker (3)

View all books by Guildhall Chambers (1)