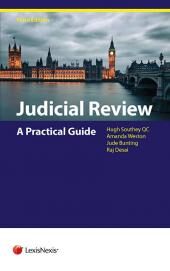 Why you should buy Judicial Review: A Practical Guide

From initial instructions to appeals and costs, the authors guide the reader through each step of the court process, and provide extensive case examples drawn from a broad range of claims. This readable and concise work includes procedural checklists and a library of precedents.

This new edition has been significantly amended to take account of developments in law and practice, including:

This readable and concise work includes procedural checklists and a library of precedents, together with all the main legislative and judicial materials.

Solicitors and barristers practising in all areas affected by judicial review.

Judicial Review, which involves the supervision by the courts of the legality of our public administration, is one of the bulwarks ensuring that the freedoms and rights of those living in England and Wales are upheld. Critical public law controls are exercised by the judiciary over the executive – namely, the departments of state that are run by ministers, as well as local authorities and quangos. When public powers, created or recognised by law, are exercised by executive government, these have legal limits and it is for the courts to ensure that what happens is lawful. Read the full foreword...

Since the last edition of this book, judicial review has continued to play a unique constitutional role in enabling the courts to determine whether government is acting lawfully. For example, the ‘Brexit’ judicial review enabled the courts to prevent the executive restricting the proper role of Parliament. That is not undemocratic as it is merely requiring decision-makers to act lawfully. Read the full preface...