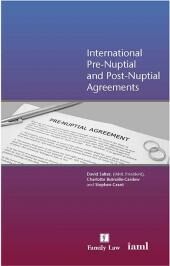 Why you should buy International Pre-Nuptial and Post-Nuptial Agreements

In an ever more international world, the issue of divorce often implies a foreign element, resulting from the different nationalities of the spouses, the location of their estates or their country of residence. European Regulation EC 2201/2003 provides for a choice of jurisdictions in divorce matters and this has encouraged the phenomenon of divorce shopping.

Most national laws provide for a contractual system whereby spouses can organise, to some extent, the financial consequences of marriage breakdown. Often these contractual agreements will be drafted pursuant to the law of the country where the marriage is to be celebrated or/and where the spouses reside. The difficulty in the case of divorce is that such contracts may not be recognised or enforced by another country which may have jurisdiction over the breakdown of the marriage of the parties.

It has therefore become increasingly important to understand the specific requirements of these countries in relation to the recognition and enforcement of the contractual documents involved, in order to ensure their validity in the eventuality of a divorce taking place in one of these countries.

With contributions from a number of fellows of the International Academy of Matrimonial Lawyers (IAML) in jurisdictions such as France, Australia, England, Canada, Switzerland and the United States, this work looks at how each individual jurisdiction approaches pre-nuptial agreements and also considers the thornier issue of agreements which cover couples involved in more than one jurisdiction.

"an invaluable guide to how pre-nups are approached in the countries which are covered ...so far as drafting a pre-nup is concerned, the chapter by Nicholas Francis QC will provide invaluable guidance"  Timothy Scott QC 9 Bedford Row

"a useful introductory walk into the jungle of nuptial agreements as to how not to be dismembered by the wild beasts lurking there ... most usefully, the essays are organised in a consistent way, first with a discussion of the law applicable in the particular country, secondly with a questionnaire of relevant considerations in the particular country, and finally, with a sample precedent ...The great merit of this book is to flag up questions that would not otherwise perhaps arise ... it will enable the practitioner to understand the comparative law issues involved, and to much more readily understand the advice that is given"  Henry Brookman, The Law Gazette

View all books by David Salter (2)

View all books by Charlotte Butruille-Cardew (1)

View all books by Nicholas Francis (1)

View all books by Stephen Grant (1)