The Halsbury’s Laws Constitutional and Administrative Law title examines the nature and meaning of the United Kingdom constitution and conventions. 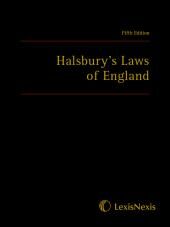 The Halsbury’s Laws Constitutional and Administrative Law title examines the nature and meaning of the United Kingdom constitution and conventions. It lays out the structure and operation of government, and the relationship between the institutions of state and the individual. Freedom of information, public finance, honours, and administration are all covered in this comprehensive title.

Professor Blackburn is a specialist in political and constitutional affairs. He has acted as an adviser to government and other official bodies in the UK and abroad. In 2005 he was awarded an LLD higher doctorate in law by Leeds University for his outstanding contribution to the study of constitutional law.

6. The Government of Wales

12. The Granting of Honours

The law is stated as at 1 March 2014, although subsequent changes have been included wherever possible.

Halsbury’s Laws. The Law. In order.

Halsbury’s Laws of England is the only complete narrative statement of the law in England and Wales, in print and exclusively online via LexisLibrary.

Every 4 seconds, someone finds an answer using Halsbury’s Laws. Whatever the subject, it has the answer, even in niche and esoteric areas. Halsbury’s Laws covers everything from the fundamental to the highly complex. It is the starting point and the finishing line.

Regarded an authoritative work, Halsbury’s Laws is written by or in consultation with leading experts, ensuring the highest quality and dependability.

"I always turn to Halsbury's Laws first when I am trying to find a convenient, accessible, accurate way to find out about a new area of law and turn to it last when I am dealing with an area of law I am already familiar with to ensure that I have not missed anything."

Anand is a leading business crime lawyer. In 2013 he was listed as one of the ten most highly regarded individuals in the International Who's Who of Business Crime Defence Lawyers.

View all books by Robert Blackburn (1)