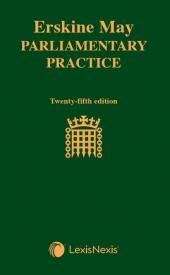 Why should you buy Erskine May: Parliamentary Practice 25th edition

Erskine May is the eponymous guide to parliamentary practice and procedure, providing accurate and detailed information on the constituent parts of Parliament, its powers and jurisdictions, membership of either House, financial procedure and the process of debate.

Alongside the incremental changes to and refinements of parliamentary practice which happen all the time, the 25th edition covers many significant developments since the last edition in 2011, including:

Clerk of the Journals, House of Commons

View all books by Mark Hutton (1)

Former Clerk of the House of Commons

View all books by Matthew Hamlyn (1)

View all books by Colin Lee (1)

Clerk of the Journals, House of Lords

View all books by Chloe Mawson (1)

View all books by Crispin Poyser (1)

View all books by Eve Samson (1)

Clerk of the Journals, House of Lords

View all books by Kate Lawrence (1)