A practical guide to this complicated area of law, for all professionals advising parents and pupils as well as schools and governing bodies.
by John Ford (Author) , Mary Hughes (Author) , Karen May (Author)
Publisher: Jordan Publishing 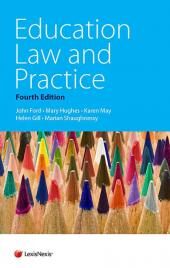 Why should you buy Education Law and Practice

The work begins with an introduction to the history and structure of the education system before examining the key issues such as admissions, health and safety, attendance, discipline, exclusion and special educational needs, as well as issues specific to further and higher education.

This fourth edition has been substantially re-written to reflect developments in law and practice including additional material on new school structures and Academies; the new SEN regime; and a new chapter on information law.

The authors explanatory text is complemented by useful precedent letters for professionals acting for parents and pupils, together with relevant consolidated statutory materials.

This work is an invaluable addition to the already meritorious Legal Action Group publications. Education law is perhaps the most important cornerstone of our society. It deals with the most valuable national asset – our children and our future. Following the Education Act of 1944, aspirations were high. A depressing and deplorable lack of foresight, energy, resources and interest has meant that we have done less than justice to the young. We are now reaping the whirlwind. There is reason to believe that in the last decade reality has obliged our legislators, local education authorities, educationalists, teachers and perhaps even judges to look more closely at the law of education and its practice. Read the full foreword...

Since the publication of the first edition of this book in 1999, the reform of education law and practice has been unremitting. Education has been at the centre of political campaigning, and there has been a tendency for incoming governments to change the structure of the educational system. Examples can be found in the abolition of assisted places in 1997, the creation of the infant class size rule and the restriction of grammar schools in 1998, and the Academies Act in 2010. One of the first acts of the Conservative Government led by Theresa May, has been to launch a consultation on the re-introduction of selective state schools. There are serious questions to be asked about the treatment of education as a political tool. Read the full introduction...