Meets the needs of practitioners, analysing what tribunals are doing and why, and draws on decisions made in over 100 unreported tribunal cases where costs were awarded or refused.
by Daniel Barnett (Author) , Samantha Cooper (Author)
Publisher: Jordan Publishing 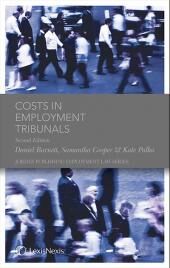 While the civil courts ordinarily award costs to the successful party, it was previously rare for employment tribunals to do the same. Costs orders are now becoming more common in tribunal cases where one party acted unreasonably or where the bringing or conduct of the case was misconceived. Employment lawyers must therefore be aware of how to obtain costs awards for clients, and how to avoid having one made against them, even if they are the winning party.

Costs in Employment Tribunals meets the needs of practitioners, analysing what tribunals are doing and, more importantly, why they are doing so. Uniquely, it draws on decisions in approximately 100 unreported tribunal cases where costs were awarded or refused, offering the reader clarity on how costs decisions are made in these cases.

The new edition has been completely revised in light of the Employment Tribunals (Constitution and Rules of Procedure) Regulations 2013. The key changes covered include:

There is commentary on a number of new cases including key court appeal decisions Sud v London Borough of Ealing 2013 and Yerrakalva v Barnsley Metropolitan Council 2012, the EAT 'threshold test' in AQ Ltd v Holden 2012 and an update on costs in Scottish cases.

View all books by Daniel Barnett (1)

View all books by Samantha Cooper (1)