Children: The Modern Law is well established as the leading textbook dealing comprehensively with the law and policy relating to children.
Publisher: Family Law 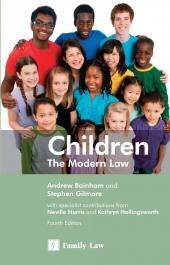 Why you should buy Children: The Modern Law

Children: The Modern Law is well established as the leading textbook dealing comprehensively with the law and policy relating to children.

This fourth edition has been extensively revised and updated to take account of significant legislative, case-law and other developments including:

* The Family Justice Review 2011, the Government Response 2012 and the likely impact of the Children and Families Bill 2013.
* Detailed treatment of parentage and parental responsibility, including the impact of the Human Fertilisation and Embryology Act 2008 and the Welfare Reform Act 2009.
* Important decisions on relocation in shared care cases: K v K [2011] EWCA Civ 793 and Re F [2012] EWCA Civ 1364.
* A new separate chapter on international child abduction, examining recent important Supreme Court decisions: Re A [2013] UKSC 60, Re S [2012] UKSC 10 and Re E (Children) [2011] UKSC 27.
* The impact on child support of the Child Maintenance and Other Payments Act 2008 and the Welfare Reform Act 2012.
* Important public law authorities on care orders in uncertain perpetrator cases (Re J [2013] UKSC 9), and on the standard of appellate review and proportionality (Re B [2013] UKSC 33).
* The Narey Report on adoption and case-law on post-adoption contact

Children: The Modern Law is an authoritative study of the legal position of children in our society and is essential reading for students of child law, family law and social work and family law professionals.