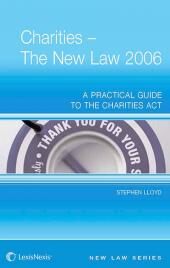 Why should you buy Charities: The New Law - A Practical Guide to the Charities Acts (Jordan Publishing New Law Series)

Written by a team of specialist charity lawyers from Bates Wells & Braithwaite, this book includes expert commentary and practical advice on the new law. Crucially, it includes the 1993 and 1992 Acts shown as they will be amended by the 2006 Act, together with the full text of the 2006 Act. The Act introduces an entirely new framework for:

The Act also amends the existing 1992 and 1993 Charities Acts in a number of areas including:

An essential reference for all lawyers, accountants, trustees and those involved in the management and running of charities.

View all books by Stephen Lloyd (2)