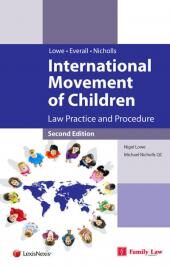 Why should you buy the International Movement of Children

Facing a children's case with an international element can be daunting. There is so much to think about: how are the proceedings going to be served abroad; will there be a dispute about which court has power to deal with; what law will be applied; will the final order be recognised and enforced in another country? These and other issues concerned with cross-border disputes concerning children are comprehensively discussed in this, the second edition of a much respected work.

The book deals with both lawful and unlawful movement of children including coverage of criminal law. Drawing on information and case-law from across the globe, it provides extensive discussion of the revised Brussels II Regulation, the 1980 Hague Abduction Convention and the 1996 Hague Protection of Children Convention and of the inter relationship between these instruments. In the UK context it discusses the application of the inherent jurisdiction. Two new chapters deal with international aspects of adoption and with international aspects of surrogacy. Also included are chapters on international relocation, international access, tracing a child, preventing abduction and on the role of children in abduction proceedings.

This new edition will be invaluable for family law practitioners, the judiciary, legal academics, the police, local authorities, non-Government agencies and government officers working in this area.

"‘the emergence of international family justice as a major element in my professional life was marked by my launch of the Presidents International Law Committee in 1992. Nigel Lowe and Michael Nicholls were among the founding members. A decade later came the monumental title, which they wrote with Mark Everall, the International Movement of Children. They were unlucky in their timing as the revision of Brussels II came too late for inclusion and had soon to be covered in a supplement ... every lawyer will have a favourite law book to which he always refers for comfort as well as guidance. For me that has always been the International Movement of Children. On all my travels it is always in my case. I have yearned for the second edition and now at last it has come ... happier this time is the timing, as Brexit receives all the consideration that is yet possible. International specialists have long ceased to be a small band. Now no family lawyer can afford to be without this title" Sir Mathew Thorpe

"It has all the hallmarks of a book destined to become a practitioners Bible. Highly recommended"  New Law Journal "an essential reference guide for all family law practitioners"  ChildRIGHT

Barrister, all of 1 Mitre Court Buildings

View all books by Nigel Lowe (1)