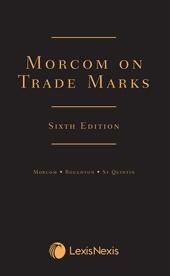 Why should you buy Morcom on Trade Marks, Sixth Edition


Morcom on Trade Marks (formerly known as Modern Law of Trade Marks) is a comprehensive guide on trade mark law, enabling practitioners to provide clients with effective advice with the best possible support and authority. It includes detailed analysis of important UK and European legislation and in-depth commentary on key cases.

This new sixth edition has been fully revised and updated to take into account all the latest developments since the last edition published in 2016.

When the 5th edition of The Modern Law of Trade Marks was published, voting in the EU Referendum had not taken place. Since the result on 26 June 2016, there has been continuous political activity and argument and there has been a considerable amount of legislation. As is widely known, the outcome, through the passing of the European Union (Withdrawal) Act 2018, and more recently of the European Union (Withdrawal Agreement) Act 2020, has been that the UK ceased to be an EU Member State on 31 January 2020. The Withdrawal Agreement, though not actually specified by date in the 2020 Act, is the one that was concluded by the UK with the EU representatives, and published by the Government in October 2019. This contained provision for a ‘Transition Period’, that ended on 31 December 2020, during which the UK was treated for some purposes as if it were still an EU Member State. Although there was provision in the Withdrawal Agreement for a possible extension of this period, the Government insisted that UK law prohibited any extension. Of particular relevance, so far as Trade Marks are concerned, is Title IV of Part 3 of the Withdrawal Agreement, containing specific and detailed provisions for the purpose of preserving the UK rights of proprietors of previously registered unitary EU trade marks and other unitary IP rights. Those provisions are all discussed in the relevant chapters of this new edition.

View all books by Christopher Morcom (1)

View all books by Ashley Roughton (2)