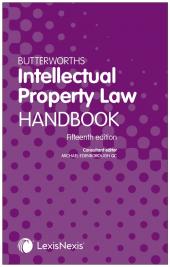 
The Butterworths Intellectual Property Law Handbook is an essential addition to your legal library, as it provides an invaluable single source collection of UK primary and secondary legislation, as well as EU and international materials in one manageable volume.

The new 15th edition has been fully revised and updated to reflect recent key developments in this area, including the UK's exit from the European Union. Key updates include:

The thirteenth edition of this Handbook appeared after the UK notified the European Council of the UK's intention to withdraw from the EU. Due to the unsettled nature of the then legislative framework, some proposed, as opposed to already in force, legislation was included for the first time. The fourteenth edition appeared during a period of continued uncertainty as to the future regime, and so it contained a new section on EU exit-related legislation – some of which has now turned out to be redundant. This, the fifteenth edition appears shortly after the UK has left the EU, and after the completion of the 'Implementation Period', and so some things are now more settled. For example, the UK is no longer partaking in the Unified Patents Court (even though its future now seems more assured), and UK attorneys can no longer represent clients directly before the EUIPO or the courts in Luxembourg in new matters. However, many UK practitioners are still involved in on-going cases before the European IP courts or tribunals or hope to become involved (though more indirectly) in such cases. As such, much of the EU material has been retained (and updated and expanded), because it is still needed.