This third edition of Lester, Pannick & Herberg: Human Rights Law and Practice has been substantially re-written to take account of the major changes which have occurred in this area of the law. 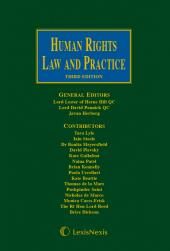 This third edition of Lester, Pannick & Herberg: Human Rights Law and Practice has been substantially re-written to take account of the major changes which have occurred in this area of the law. It includes not only a summary of European and UK human rights law but also wider international and comparative case law. It places this subject within its wider parliamentary context and connects with other jurisdictions.

Up-to-date as of March 2009 to include the latest cases, such as the judgment of the Grand Chamber of the European Court of Human Rights in A v United Kingdom (finding that the United Kingdom was in breach of the Convention by detaining terrorist suspects without trial in Belmarsh Prison); judgment of the Court of Appeal in Purdy v DPP (how Convention rights apply in the context of a possible criminal prosecution of a man who assists his seriously ill wife to travel to Switzerland to commit suicide); and the House of Lords' judgment in RB (Algeria) v SSHD (considering risk of Art 3 ill-treatment on return and the return state's assurances, and Art 6 in connection with the removed person's right to a fair trial).

Issues arising under the Human Rights Act, such as freedom of expression, conscience and belief, freedom of assembly and fair trial receive comprehensive treatment within the text. International Human Rights codes and comparative human rights law elsewhere in the Commonwealth, Ireland and the United States are also discussed. With specific chapters analysing the political history and the role of parliament in its conception and enforcement, this practical book covers all the information you need to interpret the Human Rights Act 1998 and this complicated area of law.

For further information on the book, please visit http://www.lexisnexis.co.uk/humanrights.