A practical reference for all those appearing before the tribunal.
by His Honour Judge Jonathan Butler (Author)
Publisher: Jordan Publishing 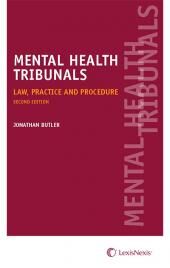 Why should you buy Mental Health Tribunals: Law, Practice and Procedure

A highly practical reference work for all those appearing before the tribunal and for tribunal members themselves. Detailed explanatory commentary about the organisation, procedure and jurisdiction of the Tribunal is followed by an analysis of Tribunal powers in relation to both non-offender and offender patients.

This new edition has been methodically revised to take into account the developing procedure of the Tribunal system, the on-going development of the mental health and mental capacity acts, as well as noting all significant case law since the previous edition.

In addition to explanatory commentary the work will be supplemented by a host of relevant materials including legislation and codes of practice, providing a one-stop-shop for tribunal members and those appearing before the Tribunal.

This new edition, first produced at a time of significant change in mental health law and practice, with the implementation of both the Mental Health Act 2007 and the Tribunals Courts and Enforcement Act 2007, remains a very welcome addition to the material available to those concerned in the field of mental health law. Read the full foreword...

In describing the rationale for this book, I am not able to improve upon the introduction to Mental Health Review Tribunals – Essential Cases (Kris Gledhill, Southside Legal Publishing Ltd, 2nd edn, 2011) where he states:

‘The law relating to detention on the basis of mental disorder and the tribunal at the centre of applications for release should be settled and certain, given that it involves deprivation of liberty and a vulnerable population, two factors that make it important that the law be clear.’

The purpose of this book is to be of use to the entire spectrum of participants (from whichever perspective) who are involved in Mental Health Tribunals. Read the full preface... 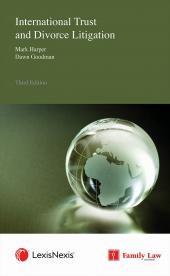