For the first time, this universal reference for continental law is accessible in both English and Arabic. 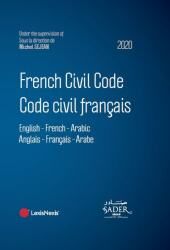 Why should you buy French Civil Code

A trilingual edition of the French Civil Code is unprecedented. For the first time, this universal reference for continental law is accessible in both English and Arabic. This publication also serves as a gateway to the civil law for common law practitioners, thanks to its selected terminology and its introductory notes.

Current as of 1 July 2019, this edition of the trilingual Civil Code provides legal experts from around the world with the latest advances in the French Civil Code, such as the reforms in contract law.

The very first French-English-Arabic edition of the French Civil Code is the result of a twofold approach that we have taken to improve exchanges between English-speaking, Arab-speaking and French-speaking jurists.

First, it results from an academic choice. Core branches of civil law are presented in the form of introductory notes written by leading specialists. The provisions of the Civil Code and accompanying comments are up to date as of 1 July 2019.

Secondly, this volume is the product of an editorial policy shaped by the terms chosen to represent French law. In accordance with the technique adopted in an increasing number of translations of French law, this Civil Code uses continental law terminology that relays the spirit of civil law and allows common law practitioners to master its specificities.

The trilingual Civil Code is:

The Arabic translation was carried out by Dr. Abir Ghanem Larson under the direction of Rany Sader, Attorney at Law (Sader Publishing).