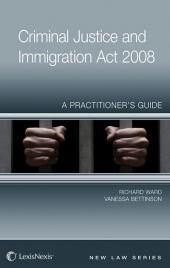 The Criminal Justice and Immigration Act 2008 is the latest in a long-line of criminal justice and immigration statutes. It contains a set of wide ranging provisions in respect of dealing with adult and young offenders, important procedural changes, new criminal offences and changes to immigration law. Amongst the matters contained in the Act include:

The breadth of the Act means that the changes impact significantly those working in the areas of criminal justice and immigration. Written by leading academic criminal lawyers, Criminal Justice and Immigration Act 2008: A Practitioner's Guide reproduces the act in full with a thorough and authoritative commentary on the provisions of the new Act and its likely impact.

View all books by Richard Ward (1)

View all books by Vanessa Bettinson (1)