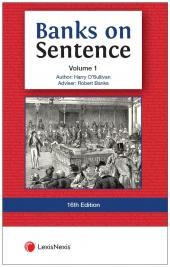 Why should you buy Banks on Sentence 2021

Banks on Sentence is the definitive sentencing guide. It is used by judges, barristers and solicitors for sentencing hearings in the Magistrates' Court, Crown Court, Courts Martial and the Court of Appeal.

Volume 1 sets out the sentencing powers available to the Courts. It contains all relevant material to set complex and overlapping legislation in context. It includes procedure to be applied in sentencing hearings, including applications for behaviour orders and appeal hearings.

Volume 2 contains all the relevant guidelines, cases and sentencing material to enable judges, magistrates and practitioners to determine the sentence for almost all commonly prosecuted offences.

Banks is the most comprehensive coverage of sentencing available. It offers substantial case authority material to assist where no sentencing guideline exists. Where guidelines do exist, Banks provides judicial guidance on the meaning and application of the terms used in a given guidance.

Also available on LexisLibrary where updates are incorporated into the content between publication of the print editions. For more information click here.

View all books by Harry O'Sullivan (1)