In part one of the Bionic lawyer, Rob provided an overview of his role and covered purpose and value, detailing some of the types of value that can be produced by a purpose within the legal industry. Part two delves deeper into the concept of the Bionic Lawyer, explaining what the project is.

A bionic lawyer is the solution to a toolkit, and in order to assemble this approach, you need levers. These are individuals or groups who aid entry into a market. At this point, Rob opened this out to the audience and asked, ‘Does anybody have a toolkit they would want dealt with in this way’?

Rob then went on to tell us about some of the early conclusions of the Bionic Lawyer project: centrally, that, with critical competitive mass and input, you can create a highly effective team. Some of the other conclusions are laid out below. 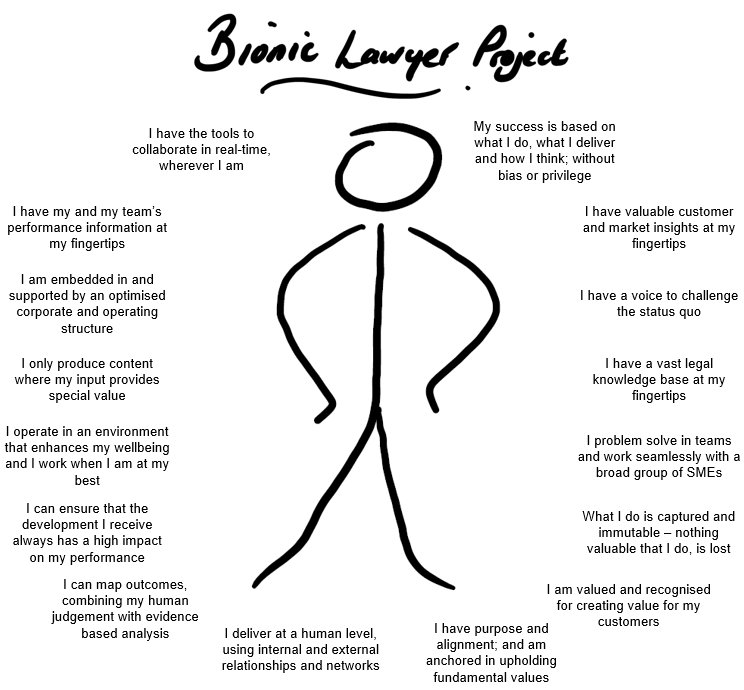 Rob discussed the concept of an innovation system and explained that the system is similar to a brain, in that the level of intelligence is based on surface area rather than size. Traditionally in the scheme of production, a company will innovate just before the output of the product. This would be the partners in a law firm. A newer form of innovation has meant it occurs early in the line, usually by senior associates. This could then be improved by having an innovation team, usually tech-experts. These experts add expert outside of the line of production. This is demonstrated in the diagram below. The central line shows the process, with the ‘P’ representing the end product. The tech experts would sit in the empty space either side. This surface area could then be filled by other experts who could provide a different innovative outlook. The aim is to fill the empty space within the triangle, thereby filling out the system and creating the most efficiently innovative process.

The smaller arrows pointing in both directions are what Rob called ‘boundary spanners’. These are individuals who leave a team or organisation, learn from a new role, and then return with the lessons learnt to benefit further. These are the underpinning architecture of a successful process and everybody should be a spanner!

Efficient decision-making is another useful tool in the process. As a general rule, five average brains can make better decisions than one smarter brain. This is a concept that has often been discussed within the economics of collaboration.

Every individual will have a diverse way of approaching a problem – this is known as a thought vector. Hence, the way how we combine thought vectors can make a huge difference to the effectiveness of team decision-making.

To demonstrate this, Rob gave the example of two people tackling a problem. If they come up against each other in the process, one may eventually win out and only one person’s thought vector will be used. So, to put it simply, 1+1=1.

If, alternatively, one individual submits to the other person’s idea there is still only one thought vector being used. Hence, it is still true that 1+1=1.

If, instead, both individuals work alongside each other, and cooperate to come up with a decision, two brains are used. Hence, 1+1=2.

However, the best process is where the pair network together and they use the best of both their thought processes through a separate mechanism (e.g. a chain of post-its). This is the best from of collaboration as it means 1+1=>2. The system and structure needed to accommodate this must be highly sophisticated, but it means a sustainable, competitive advantage ultimately becomes more achievable.

To facilitate this form of collaboration, Rob suggested we look for leaders and organisations; there needs to be something that knits together a diverse group of people, e.g. a circle of trust.

Rob’s final point related to mental wellbeing in the workplace. He told us there is a known, measurable effect on an individual’s IQ of having minimal time for tasks, a high stress work environment and high-pressure work. This means that many workplaces are no longer psychologically safe. The Bionic Lawyer intends to be a way to counteract this and to promote the importance of having a psychologically safe workplace.

To get a process performed well, it must be given to someone with time, and who has the support of a team with them.

Rob drew his interesting talk to a close by asking us for feedback. The Bionic Lawyer needs more input from more junior members from the legal industry, especially in the wake of the shocking results in this year’s Junior Lawyer mental health and well-being survey (see here).

The Bionic Lawyer Project has not yet got a website, however they do have a LinkedIn page, which you can request to join and give your feedback and keep up to date with the project as it develops.

Aspire is free to join and open to all in-house lawyers in the early stages of their legal career. Join today.

‘The GDPR: One Year On’ - looking back on the GDPR, what have we learnt and what should we focus on going forward – Part 2
In-House | 8 min read 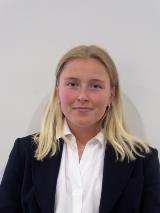