Importantly, 2014 saw a greatly increased deal flow, with 29% more firm offers announced compared with 2013. Even more significantly, aggregate deal values were over 500% greater than in 2013, with a big upsurge in deal values in the second half of the year. Bidder certainty also improved in 2014, with 25% more offer periods commencing with a firm offer announcement than in 2013. These are clear indicators that the public M&A market is recovering and this positive momentum is expected to continue into 2015.

This Market Tracker Trend Report aims to provide an insight into trends in public M&A activity in 2014 and takes a look at what we might expect to see in the coming year. It includes an in-depth analysis of the 85 firm and possible offer announcements made for companies subject to the Takeover Code in 2014. Topics covered include transaction structure, forms of consideration, foreign bidder activity, formal sale processes, offer-related arrangements and the imminent demise of the cancellation/capital reduction scheme of arrangement. 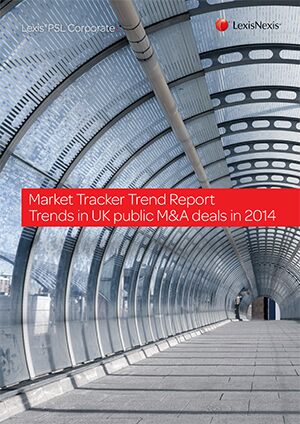 What is ahead for knowledge management in 2021?
In-house | 5 min read