Leadership focus: How to build your own resilience framework

Leadership focus: How to build your own resilience framework

As students of business, we are all intrigued by the concept of what makes a truly great leader, and what denotes success?

There are those who inspire loyalty, hard work and confidence almost instinctively from their reports, while others of a similar aptitude and charisma don't appear to achieve the same fidelity. Why do some people appear to have reached their success easily? It is a timeless question, and there’s no simple answer.

This article looks an individual’s ability to hone their skills and career, and create their own resilience, or “bouncebackability” from the most challenging of scenarios.

Are leaders born or made?

Malcolm Gladwell, a well-known journalist for The Washington Post and The New Yorker, tackled the question in his book “Outliers: The Story of Success”. He presented the notion that any skill could be mastered to near on “genius” level if the individual practised it for 10,000 hours.

I guess his point was that hard work truly does pay off. However, ultimately, he went onto explain that circumstances had a key role to play in getting a person to a position whereby they had both the means and desire to devote their full time to just one skill.

He takes famous Canadian hockey players as an example, saying that those born early on in the year have a significant advantage of getting into elite programs to train them for the major leagues, called the NHL:

It's a beautiful example of a self-fulfilling prophecy. In Canada, the eligibility cut-off for age-class hockey programs is January 1st.

Canada also takes hockey really seriously, so coaches start streaming the best hockey players into elite programs, where they practice more and play more games and get better coaching, as early as 8 or 9.

The oldest, of course – the kids born nearest the cut-off date, who can be as much as almost a year older than kids born at the other end of the cut-off date. When you are 8 years old, 10 or 11 extra months of maturity means a lot. 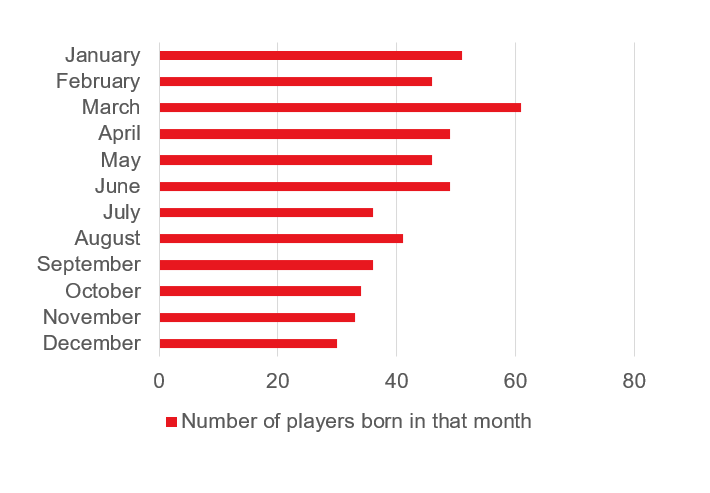 The upshot is that those children get special attention, which explains why there are more players in the NHL born in January and February and March than any other months. You see the same pattern, even to a more extreme degree, in football in Europe and baseball in the United States.

How can we apply this theory to business? It's an arguably strong example that nurture trumps nature in some circumstances. Yes, of course, some people have an innate capacity for success at certain tasks, and “right time, right place” bears some importance, but unequivocally, there is merit in the idea that we can all be makers of our own destiny.

In one article appearing in The Harvard Business Review, called The Crucibles of Leadership, the authors present the view that the most reliable indicators and predictors of true leadership is an individual’s ability to find meaning in negative events.

In interviewing more than 40 top leaders in business over three years, they were surprised to discover that all of them—both young and old—were able to pinpoint intense, traumatic events and experiences that had transformed them and given them distinctive leadership abilities. They call these events “crucibles”—a severe test or trial.

The underlying concept of such crucibles is that experiencing them changes an individual’s outlook completely. Significant life events such as redundancy, changes in someone’s personal life, bankruptcy, losing your biggest client or missing a chance for promotion are effectively a test—a chance to self-reflect, realign your beliefs and sense of self, changing your perspective indefinitely.

Perhaps, this is why we so often hear that billionaires and top business leaders are “rough diamonds” or “from humble beginnings”. It is the very act of experiencing crucibles in life that shape our ability to succeed as leaders.

Everything seems to be ticking along, and then: Your biggest client calls to say they are not renewing your contract. Or two of your colleagues, both of which joined the company at the same time you did, receive a promotion, and you don’t. What do you do?

Psychological resilience is an innate ability to respond well to a crisis. In severe circumstances, the natural response is fear, anger, confusion, which can all effectively paralyse the individual into acting ineffectively, or not acting at all. When we experience a difficult episode, most of us make assumptions about its causes, magnitude, consequences, and duration.

Resilient managers, however, quickly respond from endlessly dissecting the traumatic event, to actively looking forward and determining the best course of action given new realities.

One method highlighted by The Harvard Business Review that is successful in dealing with adversity, is that business leaders begin by seeing the problem through four lenses:

Control. When a crisis hits, do you look for what you can improve now rather than trying to identify all the factors—even those beyond your control—that caused it in the first place?

Impact. Can you sidestep the temptation to find the origins of the problem in yourself or others and focus instead of identifying what positive effects your personal actions might have?

Breadth. Do you assume that the underlying cause of the crisis is specific and can be contained, or do you worry that it might case a long shadow over all aspects of your life?

Duration. How long do you believe that the crisis and its repercussions will last?

Specifying: What aspects of the situation can I directly influence to change the course of this adverse event?

Visualising: What would the manager I most admire do in this situation?

Collaborating: Who on my team can help me, and what’s the best way to engage that person or those people?

These two frameworks are summarised in the below table: 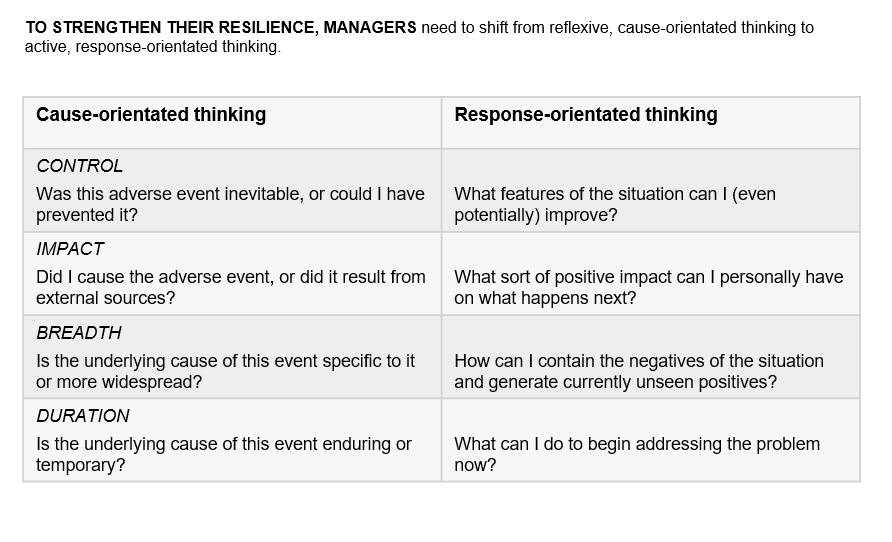 [How to Bounce Back from Adversity, HBR’s 10 MUST READS: On Mental Toughness]

For more practical tips, see this article which collates interviews conducted by LexisNexis with successful leaders, GCs and CEOs in legal:

A guide to leadership for in-house counsel – a 5 part series designed to address the practicalities of leadership as an in-house lawyer developed in association with the Cranfield Business School of Management:

Part 2: Leader as a business partner, source of inspiration and team leader

Part 4: Learning to be a leader

Not a subscriber to Lexis®PSL?  For a free trial click here.

Is flexible working the answer to stress in the legal profession?
In-House | 6 min read