How considering your leadership mindset will make you add strategic impact

How considering your leadership mindset will make you add strategic impact

At this year's Law Society In-house Division annual conference, Sophie Gould (Head of in-house at LexisNexis) and Dr Paul Hughes (Cranfield School of Management) delivered a roundtable presentation sharing best practice and practical advice on how in-house lawyers can increase their strategic impact, gain influence in their organisation and add more value to the wider business.

With so many demands on an in-house lawyer’s time, it can be difficult to know where to focus, particularly as there is always the risk of being swept along by day-to-day events. A solid starting point is to understand which activities create value for organisations. Our research identified four types of in-house activities and their perceived value to the wider organisation: With more focused investigation, it was clear that not all in-house activities were considered equal by the wider organisation. How this in turn relates to the respective in-house lawyer’s levels of influence and impact can be seen in the graph below. 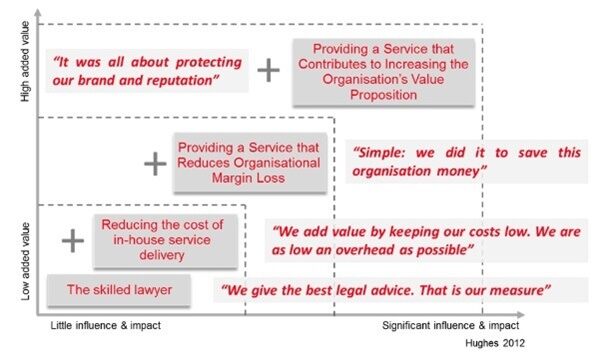 It is understood, therefore, that activities which supported organisational aims, eg protecting the organisation’s brand and its reputation, added more value than those which, for example, simply reduced the cost of in-house legal advice.

Intention was also identified as a key factor; parties need to clearly articulate the link between the in-house activity and the value it added to the organisation for it to be meaningfully impactful.

‘There is a greater call than ever for those in-house to be playing a strategic role in their organisation… today more of our GC members are on boards or in positions that report direct to the CEO.’ Christina Blacklaws, deputy vice president, the Law Society

But it goes further than clarity and intention. In-house lawyers need to have the capability and the willingness to lead to make a significant impact and play a strategic role within their organisations.

The psychological concept of ‘leadership mindsets’, as put forth by Dr Jane Trinder-Randle, is extremely useful here. It is a classification system, a framework within which different types of mindsets are outlined – the idea being that once you understand your own ‘mindset’, it is easier to tailor the approach you take to your role within the organisation.

The original research findings identified the ‘what’ and the ‘how’ that in-house lawyers were doing in relation to the services they delivered within their organisations.

The next step was to identify four ‘archetypes’ and how the archetypes relate to levels of added value and influence.

The four archetypes identified are as follows, and are aligned with the corresponding leadership mindset:

These in-house lawyers are understood to add the least value and have little influence. This archetype is aligned with the ‘expert’ leadership mindset: those who tend to value being recognised as an expert in either their technical, functional, skill or knowledge area, with little business expertise and limited attempts at collaboration.

These figures add more value and have greater influence, the latter more than the former.

The moderator aligns with the leadership mindset ‘deliverer’, while counsellor aligns with ‘challenger’. The deliverer tends to enjoy being empowered to ‘make it happen’ and deliver their objectives, often in a single-minded way. With greater business expertise, they generate influence and have impact, but still tend to operate in an isolated manner, reducing their ability to gain wider influence.

Those with the ’challenger’ mindset tend to enjoy challenging themselves and others to think, act and learn to do things differently, which they often deploy in pursuit of new and better collaborative approaches. They generate influence, though this limits their impact, as they don’t always appreciate the wider organisational context, despite the fact that they often ‘speak the language’.

This archetype adds the most value and has the greatest influence; they are leaders in their organisations. This approach aligns with the ‘strategist’ and ‘catalyst’ leadership mindsets, encompassing aspects of both. They tend to enjoy being involved in and enabling others to see the organisation as a system linking policy, process and people, while using multiple ways of managing and leading. They generate both influence and impact and, while rare, when identified are closely associated with being strategically important within their respective organisations.

The approach can be notably different according to the archetype in respect of different tasks: for example, cost reduction. Lowering costs through technological streamlining or legal process simplification tends to be described as a change in process by moderators and goalkeepers. However, the other two archetypes emphasise such changes as behavioural, with ‘values’ and ‘principles’ carrying as much weight as systems and processes.

However, counsellors (challengers) or GC as leaders (strategists / catalysts) often interpret their purpose as contributing value to the organisation at a fundamental level, regardless of the prevailing organisational context, culture or the reason they were hired.

There is no doubt the role of in-house lawyer is becoming more critical and influential.

Our findings strongly suggest that it is vital to consider attitudes, experiences and values when understanding how in-house lawyers create value for their organisations.

Furthermore, helping in-house lawyers develop their professional self-awareness and leadership mindset is a practical method to help add value to both the in-house function and the company.

To this end, we have been supporting in-house counsel for over 10 years to demonstrate commercial acumen, drive personal development and shape and influence business success with unique business skills content.

From exclusive guidance to develop management, financial and leadership skills, to sharing best practice from fellow in-house counsel and experts through interviews, discussion papers and selective networking events. Find out how you can increase your influence and demonstrate your value to the business.

We will be publishing the full report on our blog in the coming months, so please do join by completing the form alongside. You will also receive exclusive commercial news tailored for in-house counsel together with access to discussion papers, analysis and interviews with senior counsel sharing insights on how you can adapt, find ways to add greater value, seize opportunities and remain relevant and competitive.