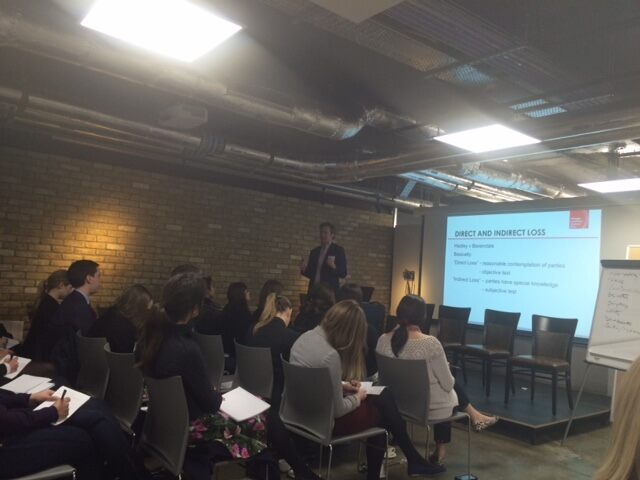 The LexisNexis Aspire networking and professional group met on Wednesday 20 January 2016 and was facilitated by Sophie Gould from LexisNexis. The ever growing group aims to provide an informative and engaging insight into the life of an in-house lawyer. This session involved LexisNexis chairing an expert panel on CV and interviewing skills, a bite size legal session on limiting and capping liability in contracts and a journey into in-house with an independent legal consultant. Aspire meets 4 times a year and provides a free networking service which is a key life line to many starting out in their in-house legal career.

LexisNexis chaired an expert panel comprising Aaron Faith, Director for In-House from Laurence Simons, Nicole Stanley, Graduate Manager at Irwin Mitchell, Edward Persse, Partner at Irwin Mitchell, Henry Gardener, Head of Legal and Regulatory Affairs at Markel International and Ivo Stormonth Darling, NQ at a major FMCG, to assess how you can spruce up your CV to secure your next legal job. Advice was applicable to the spectrum of attendees – from attaining an elusive training contract to making your mark as a NQ. The panel spoke briefly about their top tips, as your CV is ‘one of the most important documents of your life’. Nicole discussed that a shocking 40% of applications are deemed not acceptable after being scan read. So bear in mind the 7 second rule when your CV is glanced at and make sure you stand out! Elsewhere, a common pitfall was applications that failed to adequately answer ‘what their greatest achievement was’. The panel was unanimous in stating that applications must be tailored. An intriguing perspective on applications was summed up by Aaron, ensuring you did not have ‘sausage without sizzle’.

Limiting and capping liability in contracts

David Lowe, a Commercial Partner from Wragge Lawrence Graham talked the group through how to cap liability in law. David spoke about the Court’s approach to remoteness and causation in Wiseman v Virgin Atlantic Airways and categorising loss following the iconic Hadley v Baxendale. He summarised his pragmatic 7 step approach to capping and excluding liability:

Tess Beau, who owns BeauLegal, an independent legal consultancy spoke about her less conventional route into the in-house community. Tess worked as a trainer at LexisNexis, then practiced at Olswang in IP for 4 years. Her first real in-house role was as a Director of Legal Affairs – a huge jump being pushed out of her comfort zone but a highly rewarding experience. She reflected on her mistakes in not doing enough research, delving deeper and utilising networking opportunities to kick-start her career. A classic memory, early on in her career, was shockingly receiving a rejection letter from a firm – 1 year later. She emphasized that you should be able to make mistakes (not regularly or repeatedly) but in an environment that actively encourages your development.

The session finished with informal networking drinks and an opportunity to ask questions to all the speakers.

The next Aspire session will be held at LexisNexis House on 20 April 2016. For more information, or to join, please send Sophie Gould an email.