As of 11pm on 31 January 2020 (exit day), the UK is no longer an EU Member State and will no longer participate in the political institutions and governance structures of the EU.

However, in accordance with the transitional arrangements provided in Part 4 of the Withdrawal Agreement, exit day marks the commencement of an 11-month implementation period.

During this period, the UK will continue to be treated by the EU as a Member State for many purposes—putting many of the legal and practical changes associated with Brexit on hold. 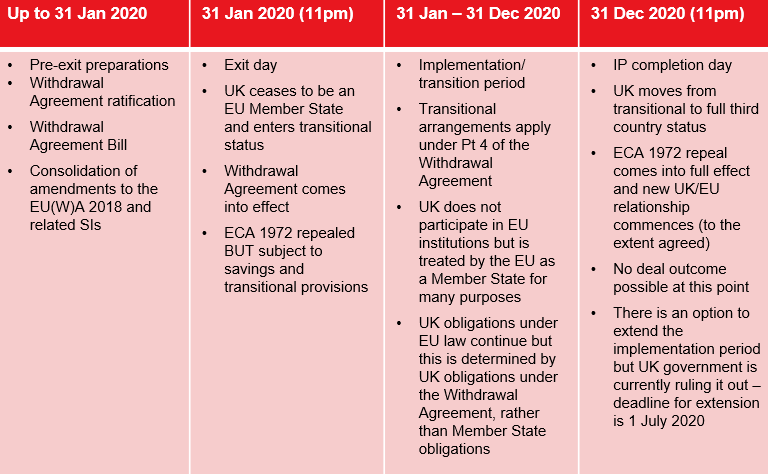 Under the terms of the Withdrawal Agreement, the implementation period will run from exit day until 11pm on 31 December 2020 (IP completion day). During this period, the UK must continue to adhere to its obligations under EU law (including EU treaties, legislation, principles and international agreements), and submit to the continuing jurisdiction of the Court of Justice of the European Union in accordance with the Withdrawal Agreement.

The European Union (Withdrawal Agreement) Act 2020 (EU(WA)A 2020) implements the Withdrawal Agreement into UK domestic law. It amends the European Union (Withdrawal) Act 2018 (EU(W)A 2018), which made no provision for an implementation period, and includes a range of interpretation and consequential provisions in order to effect the implementation period and the associated changes in timing. IP completion day replaces exit day for many purposes throughout the EU(WA)A 2020, EU(W)A 2018 and related Brexit legislation, including specific provisions to defer the commencement of Brexit SIs and related enactments.

The Foreign and Commonwealth Office (FCO) has published the ratified Withdrawal Agreement. Sir Tim Barrow, the UK’s Permanent Representative to the EU, deposited the instrument of ratification to the European Council ahead of its adoption (see: LNB News 30/01/2020 104). Completion of these steps, and the addition of the signed Withdrawal Agreement to the FCO Treaty Series marked the final stages in its domestic ratification ahead of the UK’s withdrawal from the EU at 11pm on 31 January 2020.

The European Commission has published a Q&A factsheet on the UK’s withdrawal from the EU on 31 January 2020. It includes details on the Withdrawal Agreement and Political Declaration, the transitional arrangements, the UK’s status and continuing obligations after exit day and preparations for the formal negotiations to agree a ‘new and fair partnership’, among other topics

The EU’s draft mandate for talks with the UK on the partnership after Brexit is likely to be announced on 3 February 2020 and will allow the 27 remaining EU Member States a three-week period for comments, MLex has learned

The UK's next phase of Brexit talks will be run by a ‘small and agile’ unit answering to Prime Minister Boris Johnson, his office has said, confirming a long-expected realignment. Johnson, who will make a televised address on 31 January 2020, is expected to lay out the government's detailed negotiating position for the forthcoming trade and security negotiations in early February 2020

Did you know we have a dedicated section in LexisPSL for Brexit, with a lens on each Practice Area and how it will be affected?

Click below to view our Brexit toolkit, news, legislation, practical guidance and FAQs.

Brexit—introduction to the Withdrawal Agreement

Not a subscriber to Lexis®PSL?  For a free trial click here.