A crisis of well-being – revisited

A crisis of well-being – revisited The significant response on social media and debate caused by my article “Crisis of well-being” lead to our first report on well-being for in-house lawyers published in July 2015. The report drew on survey findings, interviews and focus groups which showed a shocking picture, which if representative of the in-house sector as a whole demonstrated that we are sleep walking to a crisis where some people were being significantly damaged and many more are being undermined.

...It is two years on from the article and I wanted to write about my experience since then.

The report has been widely read and a great many in-house lawyers and teams have started to address the well-being of colleagues individually and in teams. Some General Counsel now include the topic as a fixed agenda item in team meetings; others have sought out specific training and a few have found performance indicators that are part of personal development planning – making well-being a metric of success. It is not yet enough, but it is a great start and I am delighted to see such progress.

The report has also brought people into our world who offer significant and in-depth expertise of their own. So for example for former city employment lawyer Richard Martin, now with 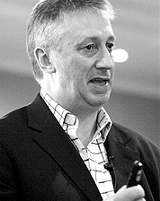 Paul leads many of LBC’s significant projects and lectures widely at events and conferences in the UK, Europe, North America and South Africa. Themes include legal services strategy, skills development and the changing face of the legal profession.

Paul qualified as a UK solicitor in 1987 and for much of his career he was an in-house lawyer. Paul was the General Counsel in two major UK financial services companies and held positions as chairman and chief executive of the national in-house lawyers Commerce & Industry Group. For six years Paul was a Council Member of the England & Wales Law Society and was elected to the Society’s Main Management Board. Until 2014 he was also Vice-Chairman and a Trustee of LawWorks, the UK’s national pro bono charity.

Paul is a successful author with six books and over one-hundred published articles in the UK, Europe, North America and South Africa