Why is advancing the rule of law so important?

Why is advancing the rule of law so important?

Have you ever considered your human rights? The Universal Declaration of Human Rights outlines our various rights under the law, the most basic being:

“We are all equal before the law.”

But, is this really the case?

Across the globe this very basic human right, and many others are being challenged. LexisNexis Rule of Law foundation identified that 57% of the world’s population lives outside the umbrella protection of the rule of law. This equals roughly five billion people who are struggling for basic human rights on a daily basis.

As advancers of the rule of law, LexisNexis’ mission is to reduce this number down to zero.

This mission was recently recognised by the United Nations, seeing Mike Walsh, CEO of LexisNexis Legal & Professional, receive a Global Leadership Award from the United Nations Foundation in recognition of the company’s contributions to advancing the rule of law globally.

Defining the rule of law

The rule of law is the foundation for the development of peaceful, equitable and prosperous societies.

In 1885 Professor A V Dicey broken the concept down into three sections:

LexisNexis has followed suit with its own definition outlined in four key points: 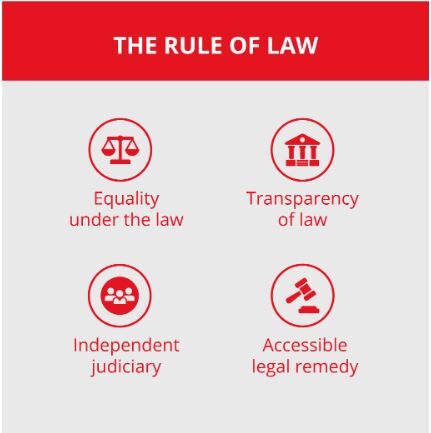 The importance of advancing the rule of law

The rule of law is at the heart of everything LexisNexis does, but why is this so important?

The rule of law underpins the foundation for all other laws, and without it nothing else functions. The stronger the components of the rule of law are, the more beneficial it is for society. For example, if rule of law strengthens by 10% around the world, then:

LexisNexis believes this is a future worth its focus and so should you.

How can you help advance the rule of law?

Advancing the rule of law is not difficult, but it does take action.

LexisNexis has and is working on various projects to help advance the rule of law. From collaborating with the International Bar Association to create the eyewitness to Atrocities App—the first app that documents and safeguards images in a secure and verifiable way so that they can be used as evidence in a court of law—to, digitising laws in its database providing transparency into the law in more than 130 countries. This has been particularly helpful in Sierra Leone, where legal aid workers only had access to one set of law books. LexisNexis digitised these books and provides 24/7 access to them, enabling the legal aid workers to triple their case load.

You may not have the same products and services as LexisNexis, but every business can help contribute to growing the rule of law through their own practices and by utilising the simple strategy LexisNexis follows:

1. How can we use the assets that we have as a business?

2. How can we work with and support carefully selected partners?

By using this approach, any business can support the rule of law and make a real difference, without necessarily making new funds available but by leveraging existing assets in new ways.

More examples of what companies are doing to advance the rule of law can be found in the Business for the Rule of Law Framework.

All Hale. The official keeper of the Rule of Law?
Future of Law | 3 min read

Supporting the Rule of Law: one book at a time
Dispute Resolution | 5 min read

Hannah is one of the Future of Law blog’s digital and technical editors. She graduated from Northumbria University with a degree in History and Politics and previously freelanced for News UK, before working as a senior news editor for LexisNexis.