The future of law: 4 ways small law firms punch above their weight

The future of law: 4 ways small law firms punch above their weight

At 95% of the total of all law firms in the UK, small law firms currently make up an overwhelming majority of the legal market. 44% of solicitors surveyed recently by LexisNexis said that they would consider working for a small firm in the future, with less than 2 in 10 citing that they would choose to work for a large firm.

The Bellwether Report, entitled, Is the Future Small?, surveyed solicitors currently working at small law firms, where the majority – 2 out of 3 of those surveyed – had previously worked in medium to top tier firms. Research conducted by LexisNexis for the Bellwether Report series highlighted that small firms are becoming more and more attractive to legal professionals as their chosen employer.

Could small law firms shape the future of law? When it comes to a law firm’s size, here are 4 ways we discovered that big, is not necessarily better:

When we spoke to solicitors who were currently working at small law firms with under 20 fee earners, 92% of respondents quoted that the ability to remain in control of their work was a key advantage. 75% felt it was a major benefit that the same person in the firm run their matter from beginning to end, meaning that they get full visibility on the process and outcome of the enquir 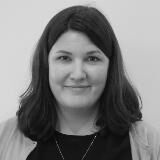 Amy leads the thought leadership and content strategy for LexisNexis UK. Her work appears in marketing campaigns, in industry press and in legal trade magazines. She is an established creative writer and researcher, with her articles appearing in national publications, such as City A.M. and Financial IT. She is also one of the writers and digital editors of LexisNexis' insights blogs including the Future of Law, and the In-house blog.