Lessons from Formula One: 5 ways to advance women in law

Lessons from Formula One: 5 ways to advance women in law

The 2014 Formula One race season is now underway, which means that Sunday mornings in my house are filled with the high-pitched sounds of screaming engines.

At a time when I am contemplating the matter of retaining women in the law, I am struck by the parallels between the physics underlying Formula One racing and the forces negatively affecting the retention of female lawyers in firms around the world.

In fluid dynamics, drag is a force that acts opposite to the relative motion of any object. Drag is a primary enemy in Formula One racing, as it works to slow down the cars. Race car engineers spend their careers altering every surface of a Formula One car in order to avoid drag as much as possible -  the shape of the nose, the shape of the driver’s helmet, the existence, size and angle of the rear wing – all are carefully crafted and regularly tinkered with to make the cars more “slippery.” Environmental conditions play a role as well. Cold air is denser than warm air - for every 10 degree drop in temperature, aerodynamic drag increases by 2%.

In the practice of law, poor culture is often the force that acts opposite to the relative motion of female lawyers. The adjective I most often hear from women lawyers in describing their law firm environment is “toxic.” A wide range of negative features typically engenders toxic culture, from poor maternity leave offerings, to an environment of competitiveness versus collaboration, to a lack of mentorship/sponsorship as compared to male peers. This form of drag is rampant and often slows down a woman’s career trajectory - even very high achieving women who start their careers at top speed. Inertia keeps many women on course, but inertia is not what should move women forward. Instead, women should be propelled ahead by the kinetic energy created by their own engines. I have seen countless examples of women remaining in intolerable situations due to inertia, only to eventually come to a complete stop due to the drag and quit the legal professional altogether.

So, what is to be learned from race car engineering? It’s this: it is possible to reduce drag by artfully engineering vehicles and creating the optimal environment for speed. To achieve this, firm culture is critical to create a warm environment. In addition, women need to be equipped with the latest tools to allow them to successfully navigate through firm politics, deal with major life events, and otherwise succeed on equal footing with their male peers. Formula One teams invest millions in testing and retesting concepts to reduce drag. In order to make progress, law firms should have a similar proactive focus on assisting women to succeed. Here are some ways law firms can reduce drag:

1. Re-engineer the female lawyer. Research has shown us that women are less likely to broadcast their successes and to vigorously advocate for their needs. We need to provide safe channels for women to self-advocate, and we need to teach them early on the importance and art of carefully executed self-promotion within the firm. This is where a strong mentor can help.

2. Sponsorship of female lawyers has rightfully received much attention recently. Firm leaders must work to take female lawyers under their wing and both advocate for them in internal politics and provide them with rich external client-facing opportunities. As an aside, I have heard more than several anecdotes where the female leaders in a firm have been the harshest on young female attorneys. It is imperative that women leaders advocate on behalf of their younger counterparts. Both male and female leaders need to be aligned in this goal for progress to be made.

3. Culture is king and law firms need to focus on creating a warmer environment to reduce turbulence. Even a well-meaning group of male partners will have a hard time creating this environment without the addition of women in decision-making roles. Men and women undoubtedly view situations through very different lenses and women partners can help to identify unintentional biases and culture concerns that male partners may not be conscious of.

4. In considering how to create a warmer environment, firm leaders need to be aware of any cancerous individuals in the firm and eradicate them immediately. A firm’s bottom line will be better off, even if the person was a rainmaker. The amount of lost productivity caused by a single toxic individual is staggering. I have experienced this first-hand.

5. It takes careful and skilled management to create a healthy environment for everyone, and especially for female lawyers. Firms should be wary of promoting lawyers with no management experience into management roles. Managers should be empathetic leaders willing to make the tough decisions, and should be well trained on how to manage people bound together in an organization. This is extraordinarily difficult to do.

Law firms everywhere and of all sizes should take a cue from Formula One. Firms should be focused on investing in research and trial and error implementation. They should work to re-engineer young female lawyers, improve a poor firm climate, and be faithful at all times to the end goal of reducing drag. Formula One cars are getting faster all the time due to significant investments in engineering. With a similar focus and investment, firms can make swift progress in promoting and retaining women. 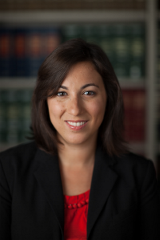 Nicole Bradick is Director of Business Development at Potomac Law Group, an innovative full-service law firm focused on providing high-end legal services to corporate legal department at a fraction of traditional law firm rates. In that role, Nicole is responsible for leading the marketing and business development activities of the firm. In addition to her work with Potomac Law Group, Nicole has launched and run a legal services business, Custom Counsel, matching freelance attorneys with solo practitioners and law firms. Nicole has received recognition as an ABA Journal “Legal Rebel” and regularly speaks and writes on issues related to the changing legal marketplace and legal innovation. Prior to shifting her focus to the business of law, Nicole was a litigator practicing primarily in the areas of federal appeals, education law and commercial litigation. She also served as a law clerk to Hon. James B. Haines, Jr. of the US Bankruptcy Court.