Following on from our introductory article ‘Legal Design Jams – 9x more productive than Jack Bauer’, Panicos Iordanou reviews the output from the ‘Process’ team at the Legal Service Design Jam hosted by LexisNexis, in conjunction with The BIO Agency, at Janders Dean’s ‘Horizons’ conference in May 2016.

Reviews of the output from the other two teams can be found here:

While there were a number of ‘smaller’ issues many of these were ultimately just symptomatic of two larger issues/problems.

The first was that lawyers - and indeed law firms generally –often ‘re-invent the wheel’ due to a lack of properly defined processes Tasks that should have be approached in a standard way across a firm – such as the onboarding of new clients – are often handled in an almost ‘ad-hoc’ manner.

The second was that law firms are not doing enough to continuously learn from and improve their processes.

How to stop re-inventing the wheel

If a law firm followed a similar approach to that taken by the ‘process’ team at our legal service design jam, the starting point would be to conduct an internal ‘tasks audit’. The objective would be to identify those tasks which, by virtue of their frequency and/or their impact, should be prioritized in terms of reducing inefficiency.

This would lead to a fairly simple matrix of situations and required actions:

How to continuously learn from and improving processes

The group identified that, in order to learn from and improve processes, law firms would need to:

Many (if not most) of the processes the teams discussed would (at least in part) be performed and/or tracked electronically. This would throw up technical challenges such as:

The group also identified a number of people-related challenges to tracking/improving processes, such as:

Against that background, the team considered what steps a law firm could take to ensure that people have the time, information/tools and motivation to do what is needed to generate, learn from and improve processes. 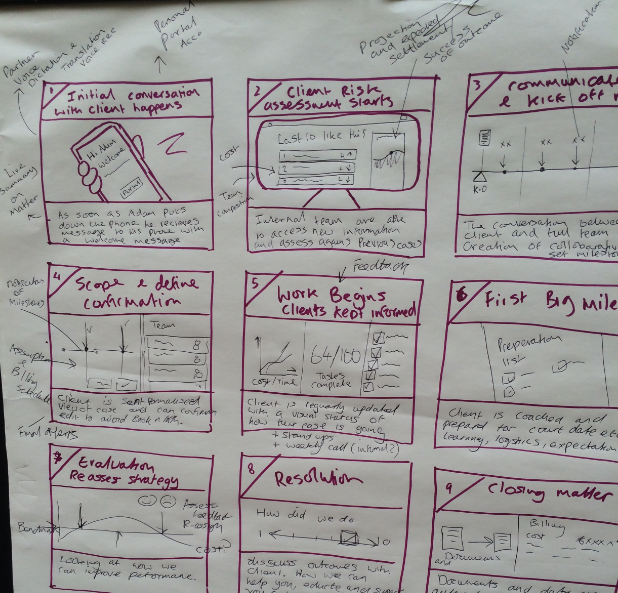 As mentioned earlier, a firm’s priority should be to avoid re-inventing the wheel for its most frequent/important processes. The client matter handling process is perhaps as frequent - and as important - as a process gets in a law firm.

The team therefore set about designing a new end-to-end process for handling client matters from the very first interaction with a client (or potential client) right through to the matter being closed. 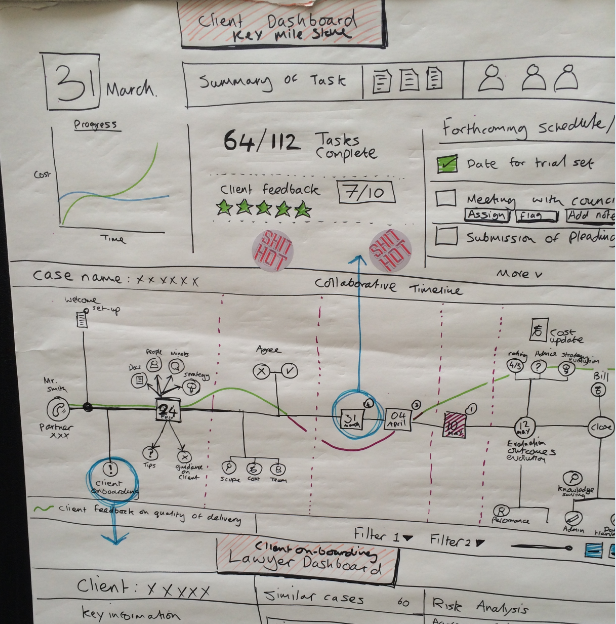 An important feature of the process would be enabling law firms to track where in the process a matter was and how ‘well’ it was going (by reference to specified criteria relevant to the matter-type) at any given time. This would bring a number of benefits including:

Given the need to depict a lot of data in an accessible and useful way, the team arrived at the idea of creating a visual ‘dashboard’ and even managed to get a first draft down on a paper within the final hour of the day!

Don't forget to read our reports on the output from the other two teams:

Finally, to read more about the actual process of running a design jam, read this article by Alex Smith (Senior Product Lead - Platform Innovation at LexisNexis).