There has been increasing interest in blockchain from the financial services sector, with the promise that it will move organisations away from the burden of maintaining older legacy systems. Larger players, like Deloitte and Goldman Sachs, are heavily researching the positives and negatives of Distributed Ledger Technology with proofs of concepts created and white papers written. However, the impact of blockchain does not limit itself to just the financial services sector. There are various features that come from this technology which will have impacts upon the legal sector too; smart contracts being possibly the most interesting of these. In this blog, I aim to go over the basic concepts of blockchain and introduce the potential impact on the legal sector.

So what is a blockchain?

Put simply, it is just a database.

The database contains a ledger which records transactions. Recent transactions are added to a new block and this system becomes an ever growing one (in the instance of Bitcoin, a new block can be added every 10 minutes).  On the Database there are parties that can share transactional data; and there are miners that approve transactions (the miners are referred to as Nodes).

To give an example: Party A wants to send Money to Party B over the network, so the transaction is then represented as a block online. The block is then shared (or broadcasted) to every node in the network. Those in that network can then approve the transaction. A new block will be added to the chain, making the chain an indelible record of the transaction and its history – and (importantly) being open for all parties in the network to see. By the end, Party B receives the money from Party A.

There are also different ledger networks: Centralised, Decentralised and Distributed. Within a Distributed Ledger every Node is a copy of the original, (sometimes identical, but usually with minor to moderate differences). Each entity may interact with one another through various sharing protocols, but each entity works independently of the others. We can liken this to Microsoft Office. Everybody may receive a copy of the software, but each user has the freedom to do what they want with the product. This is the favoured method for most experts and industry leaders who propose the use of blockchain. Centralised ledgers are based on a single party being the central point of management. This leader (or server) is there to unify `the group in the interest of collective stability and progression’. There is a balanced trade-off in this instance; in exchange for freedom the group receives a balance of security and efficiency. For example the social media site Facebook adopts a centralised method, they provide the functionality and efficiency, and in exchange they have the ability to overlook all accounts and posts. There are also different levels of control within blockchain. A Permissionless network is an open network that anybody can access; meaning anyone can make and validate a transaction. The digital ledger of transactions is shared, transparent and run by all participants. In comparison, a permissioned ledger has a layer of control within it - checking details and controlling access via invitation. This is the preferred option for the financial services and also provides an extra layer of security for potential parties.

So why use a blockchain?

As you may have guessed, there are various rules hardwired into blockchain technology which make it incredibly useful. Blockchain can fit into current systems with little disruption, as it is effectively just a stacked layer upon existing industry protocols.

Transactions are almost instantaneous and always up to date and won’t be confined to slow data logging: e.g., in the case of financial transactions, if Party A’s balance is £1,000, she cannot pay Party B £10,000. This is compared to current systems which may take some time to process transactions. Blockchain systems are highly efficient.

Transactions cannot be authorised to another party, they can only be performed by the node owner themselves. Only Party A should have an access to perform transactions using their name. This displays the security of using a blockchain.

All information is held securely regardless of the type of network, this is done through a ‘cryptographic hash’ (Hashing). Hashing is an encryption process. By adding a mathematical algorithm that converts an input of data (such as a user’s personal details) it will output those details from a message to a code.

Transactions are not modifiable, when a transaction once a transaction has entered into the ledger, it should be impossible to modify the information An example would be if in a transaction, Party A pays Party B £10, a third party cannot have the ability to change the sum of payment or its sender, or its recipient, much like how a mobile payment works today. If money needs to be returned, or further payment is needed, this would be added in another block. This demonstrates the visibility of the transaction.

Transactions are final: once a transaction is recorded in the ledger, it should be impossible to delete it. Much like in an express contract, the terms are final and legally binding once both parties agree. If a transaction conforms to a ledger rules agreed by the network, it will be eventually added to the ledger, making the transaction indelible and final.

The above features of exhibit how blockchain can encompass all the features that current legacy systems can provide, but can also add value by changing the rules on how transactions are stored and viewed. Blockchain has a potential impact not just for industries; but can aid customers seamlessly making a payment and even in reducing Governmental regulation by making transactions transparent.

So - why is this relevant to the legal sector?

Blockchain opens the market to newer technologies and the advancement of current technologies. There are a number of potential concepts that expand the use of the blockchain model to the legal sector. Possibly the biggest impact will come from the inclusion of smart contracts.

Smart contracts are self-executing (they can automatically complete actions by looking at specific terms in the contract and check if the transaction has been fulfilled) and self-updating (can update terms of the contract as and when different factors come into force e.g. new legislation or precedent on how a definition is perceived). Transactions and contract terms are very similar. A blockchain can record these terms like a transaction on a block; they would be indelible and final and any changes would just annex a block to the contract chain. The aim would be to have smart contracts take into account several different objective aspects of Contract law such as: terms of contract, offer and agreement, upholding duties within contract (whereby data is attributable) and termination of offer.

An example would be a new car that records data and can hold a digital copy of the contract on its black box. Some of its terms and conditions can, then, be automatically performed in order to fulfil a contract. For example, if one of the terms agreed had been a fixed servicing deal, when the car is booked in for a check-up, the network will automatically identify any issues (due to the recorded data) and this will trigger the garages in the area to look over a database and find out if they have the necessary parts in stock. If not, they can have these ordered prior to the car coming in for servicing. This will then record as a transaction on the car’s blockchain. This above process highlights the efficiency and benefits of a smart contract.

So – when (if ever) will I be affected by blockchain?

Interest is gradually growing; with forums being opened to discuss blockchain from the legal perspective. A recent survey by the World Economic Forum (WEF), found that a majority of experts and executives in the information and communications technology sector expect at least ten per cent of global GDP to be stored on blockchain platforms by 2025. And while the WEF doesn’t expect the tipping point for technology to occur until around 2027, Deloitte has anticipated that adoption will occur faster; as a multitude of varying applications emerge in different sectors, much like the inclusion of smart contracts.

See Vish's article on What makes a ‘Smart Contract’ smart? 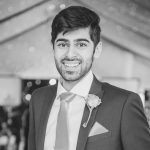 Vish is an Analyst for Product Development at LexisNexis. He is part of a team responsible for LexisNexis’s existing legal offerings and looks towards the needs of new markets. Prior to this, Vish studied law at The University of Kent and worked as a Parliamentary Assistant for the House of Commons. He has a keen interest in the role of new technology within both legal and financial services sectors.